Grassroots women of the Asia Pacific Region have borne the brunt of the unrelenting global desire for increased consumption and accumulation of wealth by a tiny minority. Their aspirations and livelihoods are regularly trampled upon in this new Asian Century, prompting thousands of women to be at the forefront of leading movements in their communities for social justice, economic equity and accountability.

Helen, Chanreasmey, Vernie and Khadiza are four such women leaders from 4 different countries spreading feminist movements on 4 different, yet interlinked issues, who shared their experiences of triumphs and travails at the 2nd plenary session—Feminist Resistances– of the 2nd APFF currently being held in Chiang Mai, Thailand.

The session had for its audience activists from various feminist movements related to indigenous women, peace and security, LGBTI, sex workers, disability, environmental justice, peasants/farmers, migrants, civil and political rights, and many more. 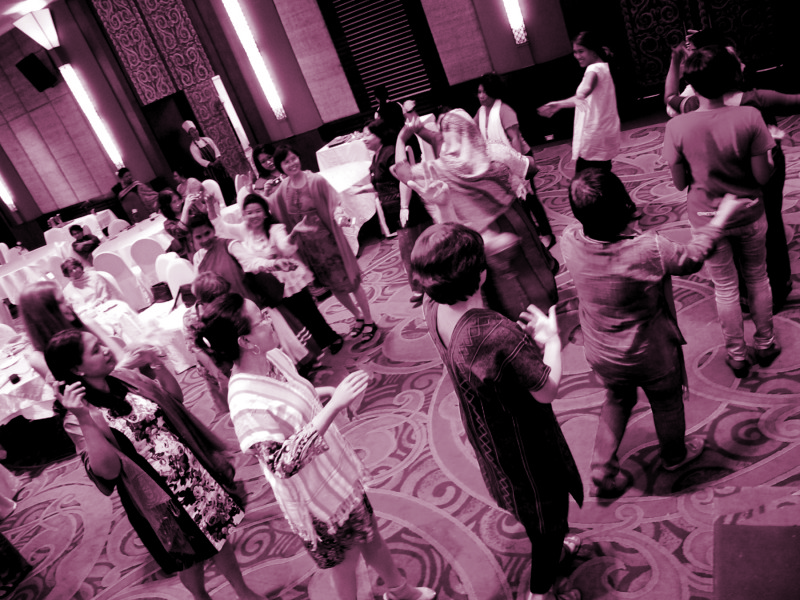 The suffering and victimisation of women as a result of the civil war and the degradation of their environment and lives by the mining industry inspired Helen Hakena of Bougainville, Papua New Guinea, cofounder of the Leitana Nehan Women’s Development Agency to start a movement to protest against violence against women and to restore peace to Bougainville.

“We mobilised communities, particularly women, to speak up against the atrocities they were being subjected to. We were prohibited from making speeches. So, wearing black badges, we took out marches singing songs demanding peace. Each one of us was a leader in our own way”.
Helen lamented that although now peace has returned to the island, other developmental problems have cropped up. A huge copper mine has been reopened and sold to foreign investors, endangering the livelihood of the local people. Women have not been included in the talks of reopening of the mines. It was only after returning from a conference in New York at the beginning of this year, where she heard about developmental justice, that Helen organised a Women’s Mining Forum.

“We formed a women only development committee to negotiate about issues related to mining—addressing land owners’ grievances, including women in mining committees, payment of adequate compensation by the mining company to the people concerned, especially widows and orphans”.

The session had for its audience activists from various feminist movements related to indigenous women, peace and security, LGBTI, sex workers, disability, environmental justice, peasants/farmers, migrants, civil and political rights, and many more.
Helen mentioned that they were building movements to deal with other issues affecting Bougainville— such as the unlawful torture and killing of women (including a rights defender) branded as witches. Till date there has been no justice and no arrests made.

Khek Chanreasmey became a land and housing rights activist when her home in Phnom Penh’s Boeung Kak area came under threat of eviction due to an urban development project. The Cambodian government gave a 99 years lease contract for that area to a private company. Faced with the fear of losing their homes without any decent compensation, she mobilised the women of the 4200 affected families to protect their land and home through non-violent means. She played a key role in securing tenure for 634 families (including her own), despite mounting odds. Her fight for housing rights and for the right to live continues under the slogan ‘Even Birds Need A Nest’.

Vernie Yocogan Diano is an indigenous woman (Kankanaey Bontoc) and a human rights activist from the Cordillera region, Philippines. She has been espousing the cause of indigenous women, especially in relation to their ownership of land and natural resources. Corporations and governments are conniving together to gain control over these assets for their selfish interests. In Cordillera itself 66% of the land is owned by big corporations. Vernie felt that, “Although women are powerful instruments for bringing social change, their role is not highlighted in mainstream media. We have to bring women’s contribution to the pages of history– to the forefront”.

It was her first foreign visit for Khadiza Akter, Office Secretary at the Sommilito Garments Sramik Federation and Treasurer of Awaj Foundation, Bangladesh. She has been working for the past 12 years to defend the rights of readymade garments’ workers. Bangladesh has >4500 readymade garment factories employing over 4 million workers, 85% of whom are women. This industry is the biggest income earner for Bangladesh and yet its workers are the most ill-treated ones.
When Khadiza started working in a garment factory at the tender age of 12, she was appalled at the human rights abuse and harassment at her work place and felt a strong need of trade unions of women employed in the garment industry. She joined the Bangladesh Independent Garment Worker Union Federation, learnt about the legal rights of workers and organised her co-workers to demand them. This resulted in her harassment by the management and ended in the termination of her services.

With help from the President of Awaj Foundation, the untiring efforts of Khadiza and other likeminded women have now resulted in the formation of 150 registered trade unions, largely managed by women. Khadiza strongly believes that, “Workers of all garment factories should be organised and unionised. As the buyers earn a profit of 77% from our goods, they must ensure the health/ life safety and job security of the work force in return. Negotiations between workers and factory owners are very important and these have already begun because of our combined efforts.”
All the speakers agreed that women should to be united in their efforts and fight together for their legal rights. Women’s movements are continuing their struggle and their links with national, sub regional, regional and global networks need to be strengthened so that all work in harmony. Vernie rightly remarked that, “There is no shortcut to building movements. We have to go through the process of mobilising and strengthening women by raising awareness and building capacities so that they can make informed choices and collectively achieve a lot. Establishing linkages/partnerships with other networks/movements and sharing resources and ideas is important because Women united can never be defeated.”