The Regional Comprehensive Economic Partnership (RCEP) is a trade agreement between the Association of Southeast Asian Nations (ASEAN) and its six trading partners China, India, Japan, South Korea, Australia and New Zealand. APWLD members joined the civil society stakeholder consultation in the 23rd round of negotiation between 16 RCEP negotiating countries. 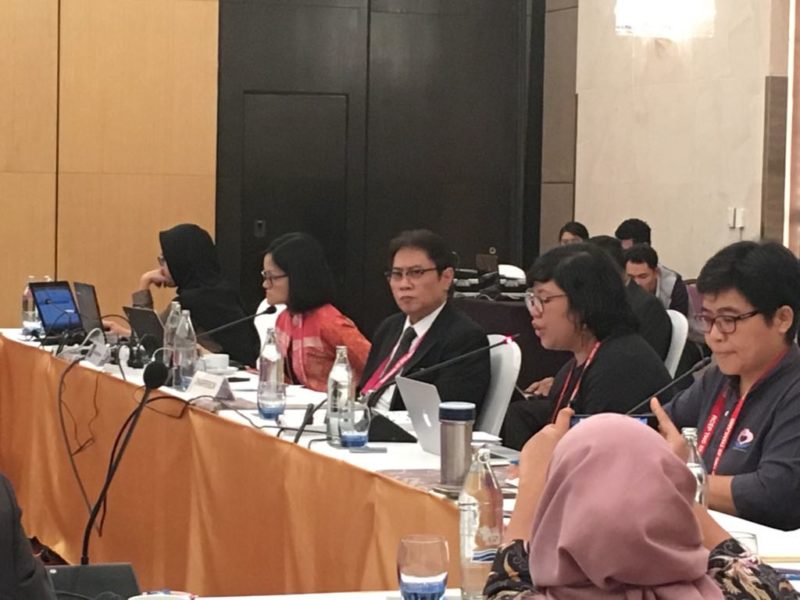 Civil society stakeholder negotiation at the 23rd round of RCEP negotiation in Bangkok, Thailand. Photo: APWLD

Good afternoon, and thank you for the opportunity. My Name is Dinda from Solidaritas Perempuan, a women’s organisation working directly with more than 5,700 grassroots women, especially peasants, fisher-folk, migrant workers, and urban poor women. We are also a member of Asia Pacific Forum on Women, Law, and Development. Continuing from my colleague, I would like to remind all of you that companies participating in global value chains have always relied on the devaluation of women’s work as a source of competitive advantage. A research on the working condition of women workers in many of our countries, finds atrocious conditions that I cannot cover in just three minutes.

We know women are getting lowest pay in almost every sector. On top of it, gender pay gap in Asia is one of the highest, averaging at 20%. But the gender pay gap in RCEP countries averages between 3% to 60% when broken down to urban and rural areas. Through its Investment Chapter, RCEP can prevent governments from even implementing legislative policies, or legal decisions and measures, including affirmative action policies to remedy this. In which case, we will never even be able to close the gender pay gap. We also know that any cuts on social safety nets due to austerity or sovereign debt restructuring and privatisation of public services are made possible by the availability of women’s unpaid labour and for women to suffer to fill those gaps. When Jakarta had privatized its water, the women from our community, who were usually responsible for getting water, experienced the lack of access to clean water, increased/high water price, the bad quality of water that also affects women’s reproductive health. After a long time of struggle, our supreme court finally decided it shall be reversed. While we were waiting for the decision to be implemented, we also worried of the possibility for Palyja and Aetra to resort to ISDS and ensure that the same privatization cannot be reversed.

Isn’t it the duties of states to ensure the interests of its peoples’ first as their rights holders? Isn’t it also the duties of states to open the space for every decision you make with transparency, meaningful consultation and genuine democratic participation of people, including women? We encourage you to realise just and equitable trade, based on the principles of international cooperation and solidarity where inclusive people’s participation and needs become a heart of the system. We express our deep concern on RCEP and all free trade agreements that are not based on the needs of people, especially the most marginalised groups including women, that will only lead us to further impoverishment, human rights violation, and loss of our sovereignty. For some of you, this RCEP might be about cost and benefit, about selling or buying, about letters and numbers. However for most of us, women, people, it is about our life or death.

My name is Matcha Phorn-in from Sangsan Anakot Yawachon, Thailand. I am also part of the Asia Pacific Forum on Women, Law & Development (APWLD), a regional network of more than 200 organisations and activists from 27 countries in Asia Pacific.

As a network that has been around for more than 30 years, our members, grassroots women and marginalized women in developing countries, have seen and experienced firsthand what it means when trade liberalisation happens and does not take into account the different needs of marginalised people. We are pleased to see that for 30 years, we hear governments finally talk about the gendered impact of trade agreements.

We see these discussions as important, but it is not good enough when discussed in the trade space. Take e-commerce for example, which is praised by many as the new entry point for women into the market. As someone who works with more than 3,000 women and youths in the indigenous communities, especially at the Thailand – Myanmar border for the last 12 years, I know that this new proposal disregards the reality in many of our developing and least developing countries, where hundreds of thousands of rural and indigenous women do not even have access to basic infrastructure such as electricity, water, and let alone internet. Are governments in this room ready to make rules for the future, when we are not even able to provide many of these basic infrastructures?

Rural and indigenous women have also seen how local herbs and seeds that have been passed through generations from generations are now going into the hands of large corporations who turn this into exclusive knowledge and profit. A few year back, one of the companies from a country in this room quietly took the กาวเครือ or Pueraria mirifica, the plant that local women in Thailand have been using for decades. Now that the company has the patent rights, the women can no longer use the herbs as their collective knowledge as they can be jailed up to two years and fined for 400,000 baht for violating the patent rights. As my earlier colleague mentioned, more of this will happen if we accept the RCEP trade agreement.

Women form the larger number of subsistence farmers, while not being able to own lands. RCEP could potentially impact your duties as states to promote genuine agrarian reforms for women farmers as you are required to provide the same treatment to a foreign corporation no matter their size.

We would like to remind you that the right to land is equivalent to the right to life because land means food, livelihood and access to resources. And women play the most important role on land and life of families, communities and beyond.