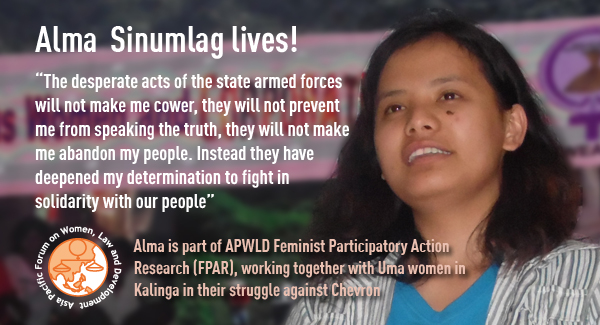 Asia Pacific Forum on Women Law and Development (APWLD) strongly condemns the recent harassment and threat by a member of the Philippine Army against Alma Sinumlag, an indigenous woman human rights defender from Cordillera.

On October 12, 2015, Alma’s family received a call from Solomon Angngao, an intelligence officer of the Philippine Army, informing them that Alma had been killed in a clash between the Armed Forces of the Philippines and the New People’s Army (NPA) in Uma, Lubuagan, Kalinaga.  Although we were relieved that Alma is alive, we are deeply concerned about her safety and by this inhuman tactic of the state military force to spread rumours and intimidate an indigenous family.

Alma has been working with Cordillera Women’s Education Action Research Center (CWEARC) to conduct a Feminist Participatory Action Research (FPAR) with the local indigenous women of Uma, Kalinga.  She has been exposing the impacts of Chevron’s geothermal development project in the ancestral territories of indigenous peoples.  Alma has been part of the indigenous women’s struggle against multinational corporations and has been tirelessly working for their human rights and fundamental freedoms.

We believe that Alma is being targeted for her history of work defending the rights of Indigenous women, particularly to their right to self determination over their ancestral lands, territories and resources, and to exercising their right to free, prior, and informed consent ahead of any development project.  These are the rights inherent to indigenous peoples recognised in the UN Declaration on the Rights of Indigenous Peoples as the minimum standards for their survival, dignity and well-being.

APWLD calls on the Government of Philippines to, without any delay, fulfil its obligations under international human rights laws.  In particular, the government of the Philippines shall: