Asia Pacific Forum on Women Law and Development (APWLD) urges the Duterte Administration to keep its hands off women human rights defenders in the Philippines.

On 21 February 2018, the Duterte Administration through the Department of Justice put forward a petition via the Human Security Act of 2007 (RA 9372), more commonly known as the anti-terrorism act. The petition named over 500 activists, a few of whom are members and close allies of APWLD, in its human rights and development justice work:

While members have often shared times activists are in harm’s way when they are listed as part of the military’s Order of Battle (OB), it hits home when you know and have worked with these women. Tita, Joan, Vicky and Beverly are not terrorists, they are one of the strongest women human rights defenders that we know. To speak against Duterte’s authoritarianism, double talk on women’s rights and anti-people policies are not acts of terrorism but rather a large part of our duty to uphold human rights and commitment to participatory democracy. 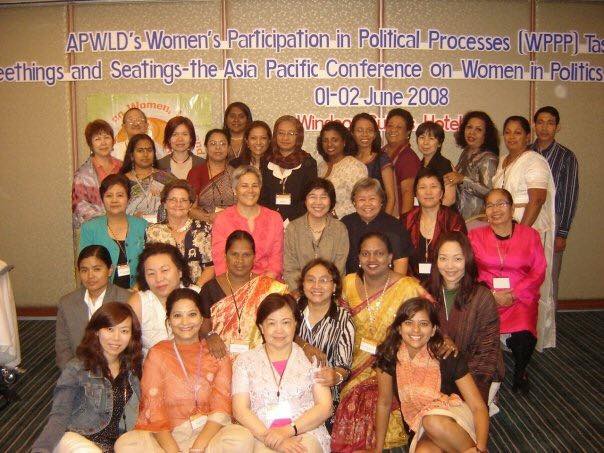 Tita Lubi (seated 2nd row from the back, wearing black) attending an event on women’s participation in political processes back in 2008

Tita Lubi is fondly remembered at the secretariat for the political direction and support she provided when she took on the position of Interim Regional Coordinator at a time when APWLD most needed it. We’ve also developed strong ties with Joan Carling when she was the Secretary General of the Asia Indigenous People’s Pact that is also based in Chiang Mai. We’ve shared celebratory and advocacy spaces with Joan given the shared commitment for upholding the rights of indigenous women. While Vicky Tauli Corpuz is one of the steadiest UN mandate holders that we know who stays true to the description of mandate holders as the “eyes and the ears” of the UN and in her case protecting indigenous people’s rights. This is the grounding that she comes from in drawing attention to possible cases of human rights violations against indigenous communities affected by the imposition of martial law in Mindanao, in response to receiving communications on this. It is very ironic that Vicky is on this list almost at the same time that her office as UN Special Rapporteur on Indigenous People’s Rights is open to receive communications on the criminalization of IPHRDs. Beverly Longid is also a close ally in development justice work particularly in trade and human rights.

The Philippines is truly one of the most dangerous countries in the region to become a human rights defender, when it is so easy to be listed on the military’s Order of the Battle for voicing political dissent. A list that renders you vulnerable to arrests under false charges, detention for an indefinite period, tortured or even killed. To make matters worse, these are legitimised by laws like the Human Security Act of 2007 that is now being used to legitimize persecution of HRDs and normalize violations targeted at them.

About twenty years ago (1998) the UN General Assembly adopted the Declaration on Human rights defenders, and just recently our members shared that an HRD bill was also in the making in the Philippines. This would have been a step towards putting into action the Philippines international commitments to uphold and protect the rights of HRDs who are doing legitimate work over and above their duties and working in extremely harsh conditions. However the petition listing Tita, Joan, Vicky and Beverly as terrorists speak of the opposite and evident of the backlash against human rights defenders who dare to speak against this administration. We are worried for these four women and even more worried for other HRDs like them.

As the Philippines currently holds a seat in the Human Rights Council, more is expected of the government and how it stands for the rights of its people. Thus, we hold the Philippines accountable to this responsibility and urge them to:

For any press queries, interviews and further information, please contact: