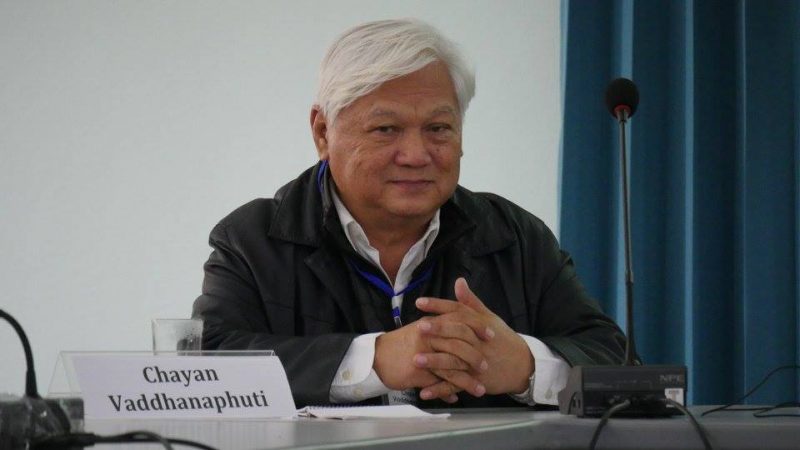 We, the undersigned organizations, call on the Thai authorities to immediately drop all charges against academics and participants who attended a recent conference in Chiang Mai, and to uphold academic freedom in line with Thailand’s human rights obligations.

This week, Professor (in Thai, Ajarn) Chayan Vaddhanaphuti and five other academics have been asked to report to police for actions related to the 13th International Conference on Thai Studies, held from 15 to 18 July, 2017 in Chiang Mai. Prof. Chayan and the others are being charged with violating the Head of National Council for Peace and Order (NCPO) Order No. 3/2015, which bans political gatherings of five or more persons. Prof. Chayan has stated that he did not organize the conference for a political purpose.

Authorities also charged, under Head of NCPO Order No. 3/2015, the following individuals: Pakawadee Weerapaspong, an independent writer and translator; Chaipong Samnieng, PhD student with Chiang Mai University’s Department of Social Sciences; Nontawat Machai; and Thiramon Bua-ngam, student at Chiang Mai University. They have been charged for unlawful gathering and holding posters that read, in Thai, “An academic forum is not a military barracks,” in protest of the military’s surveillance of participants during the conference.

The conference, held every three years, dealt with many issues currently facing Thailand including topics related to military rule. The authorities’ actions are an attempt to silence academic discussion and a violation of civil rights.

Prof. Chayan is an intellectual and human rights defender who has been advocating for the rights of local communities and indigenous peoples in Thailand, defending their rights related to land and natural resources. He is well-known throughout the Mekong region for his work promoting principles of sustainable development with full respect for community rights, including their right to participate in decision-making around development projects.

Though Prof. Chayan must officially report to the police to acknowledge the case against him today (21 August 2017), the charges violate Thailand’s obligations under international law. As a state party to the International Covenant on Civil and Political Rights (ICCPR) and the International Covenant on Economic, Social and Cultural Rights (ICESCR), the Thai government has an obligation to protect the rights to freedoms of opinion, expression, association and peaceful assembly, as well as academic freedom as part of the right to education. Freedom of expression and academic freedom are also constitutional rights in Thailand. Section 34, Paragraph 2 of the 2017 Constitution states that “Academic freedom shall be protected, provided that the exercise of such freedom shall not be contrary to the duties of Thai people or good morals of people and shall respect and not impede differing opinions of other persons.”

The conference participants who are being charged for holding posters did so to send a message to plainclothes soldiers and police who entered the conference venue unidentified, disregarding a conference rule requiring name badges, intruding on discussions, and photographing people without their consent.

After the conference, Chiang Mai Province Deputy Governor Puttipong Sirimart sent a letter to the Ministry of Interior threatening Pakawadee and Chaipong for holding placards which allegedly criticized the military. Prof. Chayan had consulted the Governor of Chiang Mai prior to organizing the conference.

Since 2014, hundreds of individuals, including academics, activists, journalists, human rights defenders, and politicians, have been arbitrarily detained in military camps and subjected to interrogation techniques which the NCPO refers to as “attitude adjustments.”

On Tuesday, August 8, the NCPO published an order related to Article 44 of Thailand’s interim Constitution which paves the way for outsiders to become executives of public universities. Some academics are concerned that the military now seeks to install a member of the military as head of Chiang Mai University.

Academics have already spoken out against the military’s violations of civil rights. On July 17, the Community of International Academics, which includes 177 Thai and foreign scholars, released a statementcalling for an end to the oppression of academic space in Thailand by the military government. On August 11, researchers at CMU issued a statement calling for an end to limits on free speech and academic freedom.