Skip to content
Home > Strike to regain our economies, our planet, our power as workers

Strike to regain our economies, our planet, our power as workers 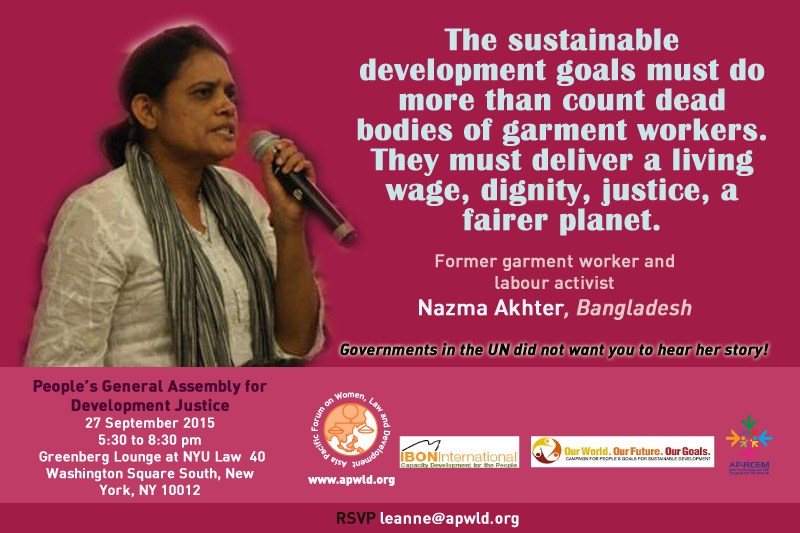 I’m here to represent the 60,000  members of the garment workers union I formed but also for the hundreds of millions of women working in the Asia Pacific region as the engine of Asia and the world’s economic growth.

Like Eni, my story is one that is driven by poverty, by exploitation and the belief that solidarity and collective action is our only path to development justice.

I began working as a garment worker at 11 years old. I left school and joined my mother in the factory she was working at.  In the years that followed I experienced and saw dangerous work environments, unpaid wages or overtime, lack of maternity leave, sexual harassment and fierce opposition to trade unionism and freedom of association.

You are all probably aware of the Rana Plaza collapse. This wasone of many deadly results of labour exploitation in Bangladesh. While a lot of attention has gone into the health and safety issues and the corruption and employer threats that led to women being forced to work in a building they knew was unsafe, less attention has gone into the right to organise and to a living wage as well as other labour rights.

I wonder what the sustainable development agenda means for garment workers

But, unfortunately, they fail to tackle the root causes of inequality or deliver real system change. There’s nothing that addresses the importance of a living wage or to protect trade union rights.

The sustainable development goals include a target to end child labour.  But it needs to be made clear that my parents, in fact no parents, wanted me to work as a child.  Instead it was the only way to survive. My parents income was not enough to allow a family to survive. There are few choices for parents. If girls can’t work they are likely to be forced into early marriages and even sold in indentured labour (like brick making). Women garments workers are less likely to be forced into child marriages (and we have one of the highest rates of child marriage in the world) and are less likely to pay dowries.

So the way to end child labour is to guarantee living wages and social protection. It’s not to criminalise parents.

Governments are still developing indicators that will measure progress toward sustainable development. They are proposing that the right to Decent work be measured by counting deaths and injuries in the workplace and by the number of conventions signed. In Bangladesh we know too well that counting dead bodies does not result in living wages, in union rights, in social protection, in less discrimination or sexual harassment or in justice for the dead or injured workers and their families.

If there was just one indicator to measure Decent Work it should be the percentage of people, particularly women, who are members of trade unions able to genuinely assert workers’ rights and collectively bargain. The right to independently unionise is the right that unlocks all others.

A global commitment to a living wage mechanism that is enough to live with dignity, happiness and support our families is an urgent need. As well as being essential for our human rights it would stop companies threatening to move from one country to the next in an endless search for the cheapest, most exploitable labour.

But it’s not just the lack of commitment to honour labour rights that undermines the development goals. There is no commitment to change the economic systems that allow companies to avoid tax, to hide behind untraceable supply chains,  to use offshore bank accounts or to pay for the damages they do to people’s lives and the environment. There’s also no money being committed to help least developed countries to develop the public services, institutions and social protection we need.

Governments know and have even publically recognized the problems of growing inequalities. But they continually deny us labour rights. Why is this? Because our governments are not democracies. They do not serve or represent the interests of the people. Instead they represent the interests of the wealthy and powerful. This is the case in Bangladesh and this is the case in the USA.