Skip to content
Home > Statement: Feminists from India and Pakistan Call for Peace in the Region

Statement: Feminists from India and Pakistan Call for Peace in the Region

We, feminists from India and Pakistan at the Asia Pacific Forum on Women Law and Development (APWLD) express our growing concern on the escalation of conflict between India and Pakistan. We note with mounting dismay that the rhetoric deployed by both Governments is aimed at creating an unstable environment where media and social media is used for proliferation of unsubstantiated claims and counterclaims that are encouraging hyper-nationalism and religious fundamentalism. Many lives have already been lost, including those of soldiers and civilians. We urge both governments to stop exploiting  the spectacle of war to reap political mileage in the two countries at the expense of people’s lives, peace and justice.

We are particularly concerned about the effects conflict has and has had on the women of South Asia, particularly sexual violence, enforced disappearance of male family members leaving women headed households vulnerable and economically insecure, and growing fundamentalism and curtailed civil and political rights leading to abrogation of women’s human rights.

The ‘retaliatory’ attacks on Kashmiri civilians across India in the aftermath of the suicide bombing of the Central Reserve Police Force convoy in Pulwama can never be acceptable or justified. Citizens of Kashmir in India have suffered through decades of conflict. By some estimates there are thousands of mass graves, sexual assaults, enforced disappearances, extra judicial killings, torture, blinding and maiming over the decades, as draconian laws like the Armed Forces (Jammu and Kashmir) Special Powers Act (1990) and Public Safety Act (1978) have been enforced in the valley, granting complete impunity to the armed forces[1]. Not a single accused armed forces personnel has been prosecuted in civil courts till date[2]. Reports of religious minorities in Pakistan facing violence on account of these transgressions in India are also increasing in ‘response’. In all situations, women, sexual minorities and children are left without means to safeguard their right to live free of violence or discrimination.  We note with particular concern that the issues in the upcoming General Elections in India have been completely usurped by the rhetoric of war and ‘revenge’. We further urge the mass media in both countries to act with dignity, abide by fundamental principles and ethics of journalism and restraint instead of propagating fake and unverified news and fomenting conflict. 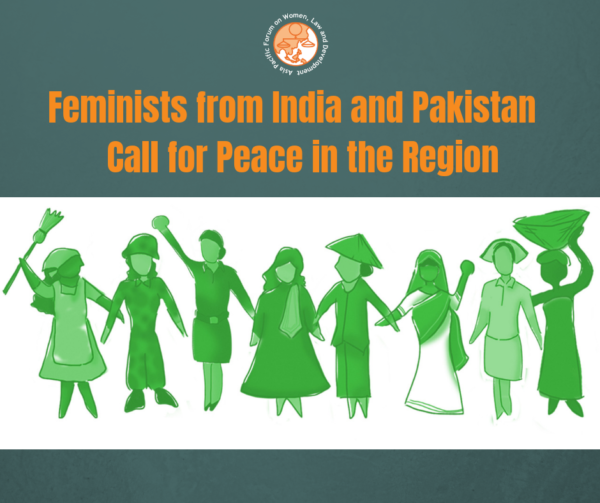 We urge the Indian Government not to equate an entire state with a terrorist outfit as this sets a dangerous precedent. Further, we urge the Government of India to move away from it’s narrative of blaming Pakistan for waging a ‘proxy war’ and instead acknowledge the root causes of this conflict: the legitimate demands of Kashmiris and the need for demilitarisation of Indian-held Kashmir. The Government’s policy in Kashmir in the last few years, including but not limited to use of pellet guns to blind and kill thousands of youth, have only resulted in exponential increase[3] in young Kashmiri boys joining armed insurgency. We condemn the refusal of the Government of India to excoriate attacks on Kashmiri civilians across India until over a week after the Pulwama terrorist attack. Meanwhile we have seen a growing environment of insecurity created for Kashmiris and Muslims across India. The Government of India must refrain from jingoism and take action to condemn with equal force the attacks on civilians based on ethnicity and religion just as much it condemns the terrorist suicide bombing. As South Asian feminists, we reiterate that peace,security and democracy of the entire region is linked to the just resolution of the Kashmir issue, through a process which centers the voices and democratic participation of Kashmiris themselves.

We urge the Government of Pakistan to investigate the human rights violations caused due to militarisation in regions like Federally Administered Tribal Areas (FATA)[4] and Pakistan’s use of militants as proxies to fight its wars and suppress dissent. The growing militarism and military surveillance and control of everyday lives of citizens notwithstanding, fundamentalism continue to exist and target religious minorities and women. Further, ex-militants have not been held accountable for their actions and in some instances have been allowed to contest in the electoral processes[5], while disbanded outfits have been allowed to regroup despite their unchanged extremist ideology. Importantly, we urge Pakistan government to also prioritise the concerns of Kashmiris in Pakistan-held Kashmir[6].

We ask both governments to:

As the two largest countries in the subcontinent, both governments must aim to seek lasting peace solutions involving all parties and work together to achieve goals of peace, justice and sustainable development.  We condemn any further actions from the both governments that escalates fundamentalism and disaffection among their citizens.

Asia Pacific Forum on Women, Law and Development (APWLD) is a leading network of feminist organisations and grassroots activists in Asia Pacific. Our 236 members represent groups of diverse women from 27 countries in Asia Pacific. Over the past 32 years, APWLD has actively worked towards advancing women’s human rights and Development Justice. We are an independent, non-governmental, non-profit organisation and hold consultative status with the United Nations Economic and Social Council.