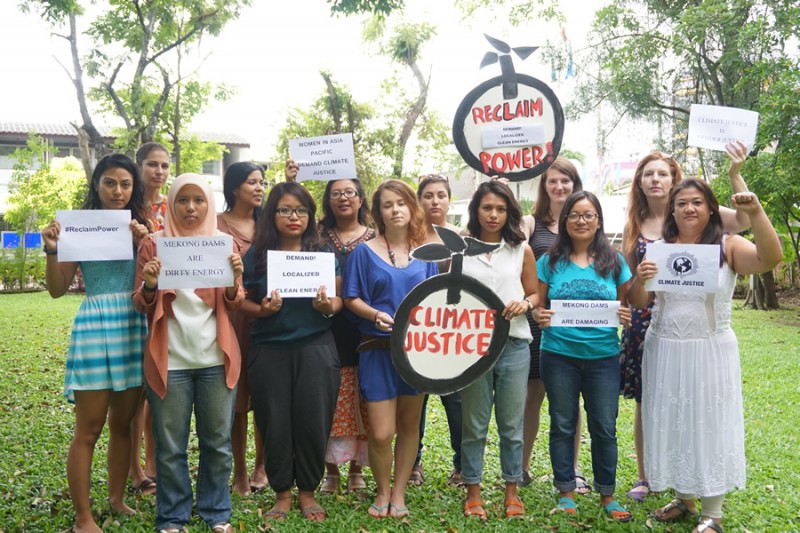 We, the Asia Pacific Forum on Women, Law and Development (APWLD), join climate change activists from across the globe to show support and stand in solidarity with the Reclaim Power movement to demand the end of dirty energy and provision of energy democracy.

The Mekong River runs from southern China and connects Myanmar, Laos, Thailand, Cambodia and Vietnam. The Mekong River is responsible for sustaining rural life in Southeast Asia by providing a water source, fertile lands, nourishment and a secure income. The river is a cornerstone for the surrounding ecology which is the second most biodiverse river in the world and produces a quarter of globally consumed freshwater fish.

Despite sustaining 300 million people and  many indigenous peoples, the river is threatened by 11 new or upcoming dams on the Southeast Asian stream, which follow dozens more upstream in China. Dams are dirty energy because of their adverse impact on the environment surrounding them and are actually causing greenhouse gas emissions, despite the wider perception that they are clean, renewable energy. A recent study has shown that dammed rivers, especially in the tropics, account for 4% of human-caused greenhouse gas emissions[1] – just as much as the aviation industry. Dams are also responsible for blocking fish from their spawning habitats and changing the river’s nature from free-flowing to slack-water. The stagnant water has led to changes in temperature, oxygen levels, and chemical composition making the new basin an unsuitable habitat for aquatic plants and animals, instead fostering new invasive species such as snails and algae.

The impact of trapping sediment flow from accessing the river downstream is also very concerning. Sediment flow naturally replenishes the river’s ecosystem; when trapped, the erosion occurs throughout the riverbeds and riverbanks. This deepening of the river significantly lowers the water level to an extent where it cannot be reached by dependent plant roots. The declining water levels have the potential to devastate human communities as it no longer reaches the wells. The impacts of water levels have already been felt in Northern Thailand where erratic weather patterns have already flooded the riverbanks in dry season and dropped unexpectedly when needed most[2].

These dams threaten the very existence of indigenous and local people as it destroys their fisheries, traditional agriculture and affects their food security. The loss of livelihoods impact women the most as they are responsible for their family basic needs, including for providing food, water and fuel. The dam’s harsh impact on the river’s ecosystem means women are forced to look for other sources of water and nourishment while simultaneously balancing their role as caregiver for children and the elderly.

Inaccessible decision-making spaces and a lack of resources drown the voices of indigenous and local women in Southeast Asia. These big development projects – often financed by multilateral development banks- are conducted to the detriment of the rights of local populations and of the environment. Funded by the Asian Development Bank (ADB), the Song Bung 4 dam in Vietnam has affected more than 24 4000 people living on the reservoir site[3].  Income and security shrink as the dams get bigger resulting in conflicts amongst communities over access to resources and opportunity.

The call for the end of dirty energy can’t stop with the call for the end of fossil fuels; we must end energy which relies on the destruction of traditional agriculture, access to water-based livelihoods and, if not the climate, the environment. This includes agrofuels, waste incineration and mega hydroelectric projects such as the dams on the Mekong River. To do so, we must shift away from our current energy systems designed for the profits of big multinational corporations to decentralised energy systems, owned by public sector and local communities, that meet the needs of the people, especially those you currently don’t have access to it.