At a rally held in Hyderabad today, women from different parts of India marched along with other marginalised communities to protest the Regional Comprehensive Economic Partnership (RCEP), the mega Free Trade Agreement which is currently being negotiated in India. The women’s groups working on farmers’, Dalits’, land rights, national resource rights, indigenous women’s, minorities’, fisher women’s, labour rights and other human rights concerns, strongly said no to RCEP seeing it as a reinforcement of the destructive development model that the existing free trade agreements and the policies of liberalisation, privatisation and globalisation have inflicted upon the world’s poor and particularly poor women. 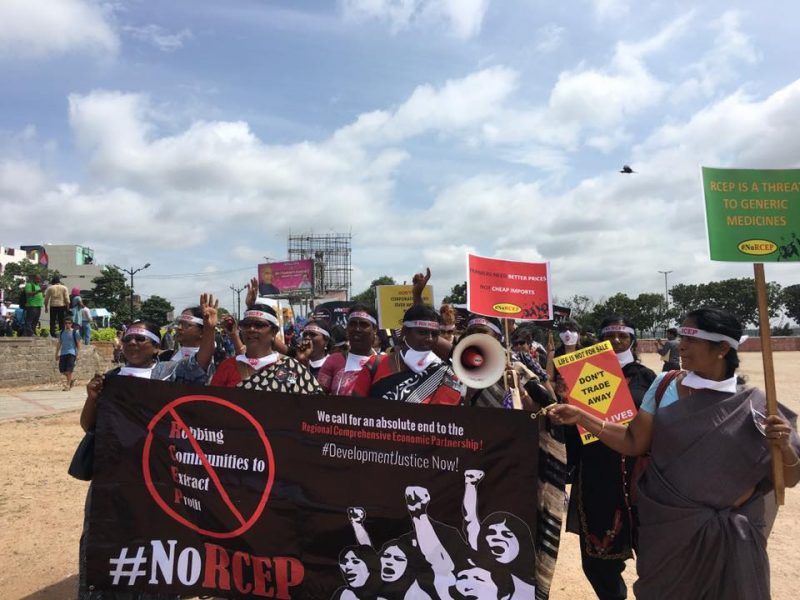 Burnad Fatima from Federation of Women Farmers Rights, Tamil Nadu and APWLD member said, “Women farmers are going to be the worst affected by this free trade agreement. Land grabbing for corporate agriculture will impact our food sovereignty, rights over our land and seed preservation. It will force women to migrate to seek labour and become vulnerable to trafficking.”

“RCEP and other similar free trade agreements are in reality the legal contract to give multinational corporations rights to destroy traditional livelihoods and lifestyles of indigenous communities. Indigenous women as the tradition keeper of their community’s local knowledge, seed, biodiversity and food sovereignty will lose their control as RCEP will put these knowledge and biodiversity into the hands of corporations under the guise of intellectual property,” said Banamallika Choudhury, Women’s Rights Activist and APWLD partner

“It is deeply concerning that this trade agreement directly impacts women, but is not being discussed in the Parliament, State Assemblies, or at Panchayat and Municipality levels,” said Albertina Almeida, APWLD member and an activist and lawyer from Goa. It is worrying that negotiations which have a bearing for the people/communities, are conspicuously shrouded in secrecy, she added.

Kate Lappin, Regional Coordinator of Asia Pacific Forum on Women, Law and Development (APWLD) added, “The RCEP and other trade agreements give multi-national corporations the right to govern at the expense of women’s livelihoods, the environment and democracy. A system that allows corporations to sue governments when they attempt to regulate corporations, protect the environment, provide public services or protect public health is a corporatocracy, not a democracy. Women have been at the heart of the movements to stop other trade agreements like the TPP and to halt the deadly advances of the WTO. We will use the same solidarity to stop the RCEP. ”

The women’s groups urge the Indian Government to stop negotiating a trade agreement based on US model of corporate trade and move to a people’s trade agreement that truly advances Development Justice.

In this backdrop APWLD on behalf of the rural, indigenous and urban poor women of its member countries demand that governments:

Regional Comprehensive Economic Partnership (RCEP) is a trade agreement between India and sixteen other countries including China, ASEAN countries, Japan, South Korea, Australia and New Zealand. Further analysis about RCEP’s impact on women is available here. This video campaign released by APWLD during the previous round of negotiation expresses concerns about trading away human rights.

Asia Pacific Forum on Women, Law and Development (APWLD), a leading network of feminist organisations and grassroots activists in Asia Pacific. Our 211 members represent groups of diverse women from 26 countries in Asia Pacific. Over the past 30 years, APWLD has actively worked towards advancing women’s human rights and development justice. We are an independent, non-governmental, non-profit organisation and hold consultative status with the United Nations Economic and Social Council. F:apwld.ngo  T:@apwld