Feminists from all over the world gathered together for the Climate March held at the sidelines of COP 25 in Madrid, calling attention to the disparities and injustices women and non-binary people face from climate crisis to domestic violence.

Paying homage to the Chiliean Feminist collectice, Las Tesis, feminists at the Climate March held an action to show the system in place continues to inflict violence on the lived realities of women and non-binary peoples. The original song and dance calls out the Pinera Regime’s use of gender based violcence, torture, disaapearances, and rape in response to the people’s anti-neolberlism movements in Chile. The song performed at the march calls out the violence against women and non-binary people in the context of the climate crisis and a demand that #FeministsWantSystemChange.

“Women and feminists have been on the frontlines of the protests in Chile, as they are on the frontlines of the climate justice movement. Today as I march and sing this, I demand our government to end the economic, political and sexual violence towards women, girls and gender non-conforming people and protect the right to freedom of assembly,” said Antonia Zambra, Observatory of Inequalities, Chile. 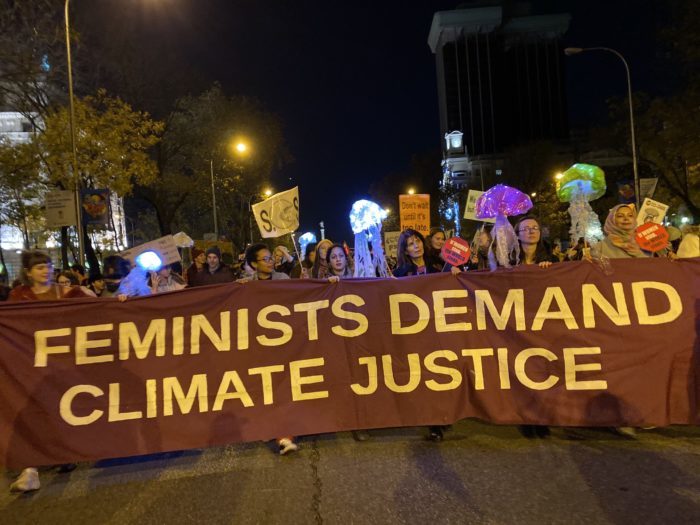 Women and gender groups present at COP 25 are concerned that systemic barriers such as militarism, authoritarianism, patriarchy, colonisation are accelerating the climate crisis and yet are not being addressed in the negotiations. “We are extremely concerned that this COP will set the groundwork for a climate action mechanism that will affect generations after us and that will threaten women’s human rights and harm the environment. It is unacceptable that it will set up rules for implementing Article 6 of the Paris Agreement without social and environmental safeguards,” added Patricia Bohland, LIFE, Germany.

“With the direct impacts of climate change on Small Island Developing States particularly for the Pacific, we demand that governments ensure that Article 6 is inclusive of strong human rights language. We cannot sit back and watch while our most impacted and marginalised groups continue to face the injustices that are often exacerbated by climate impacts,” Tamani Rarama Fiji Youth SRHR Alliance, Fiji.

Civil society groups marching at the Climate March want to remind the governments currently present in Madrid to address urgent climate action that ensures a rights-based and people-centered global framework that works towards a just transition for all.

Since the Earth Summit in 1994 the United Nations has been working with governments and civil society to tackle climate change. Every year members of each government meet at the Conference of the Parties (COP) where Civil society and non-governmental organisations are welcomed to these conferences as observers to offer opinions and expertise, and to further represent the people of the world. The Women and Gender Constituency provides a number of ways for civil society and non-governmental organisations which work for women’s rights and gender justice, environmental protection, or both, to guide the annual conferences on gender issues. Website: womengenderclimate.org; Twitter: @WGC_Climate