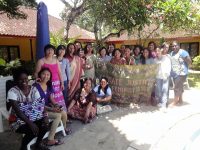 This programme is rooted in movement building among these communities to solidify women’s rights, empower women, and provide women with the tools necessary to create a narrative that prioritises their struggles for justice in the face of climate change. During FPAR, which is conducted by and for women, women collect and provide evidence on the impacts of climate change on their lives and utilise this information to collectively take action. Over the course of the next 18 months, APWLD will host four regional training sessions to provide the selected organisations with tools, skills and advocacy opportunities to elevate local women’s voices in climate related decision-making processes.

Eight grassroots organisations have been selected to take part in this new round of CJ FPAR. This year, the CJ FPAR focuses on the theme ‘Climate-Induced Displacement’ and is providing support to organisations focusing on communities displaced or facing displacement as a result of climate change, including those caused by natural disasters, slow onset impacts and climate change policies.

The following organisations were selected to participate in this programme:

Maleya aims to protect and strengthen indigenous knowledge and value towards the environment and culture, to advocate for just policies related to climate change, to increase gender equality within indigenous communities, and to promote peaceful conflict resolution within indigenous communities. The foundation has helped indigenous people voice their concerns as part of the UN’s global and nationally led programme, Reducing Emissions from Deforestation and Forest Degradation in Developing Countries (REDD+).During the next 18 months, Maleya will focus the CJ FPAR on women’s decreased access to natural resources in response to deforestation and increasingly limited access to forests, including because of the implementation of a REDD+ programme.

HA prioritises indigenous communities in order to ensure their ability to exercise rights to their lands, natural resources, identity, and rights to education. Through FPAR, HA will look at ongoing and planned displacement of communities, in particular indigenous women, caused by the building of the Lower Sesan II dam in the Mekong River.

NEADS is a grassroots volunteer group that works to strengthen coping mechanisms of disaster prone communities, empower women, establish and promote community based institutions, and increase livelihood opportunities for farmers. Their FPAR, which will be led by a group of women who have organised to address concerns regarding agricultural sustainability and women’s livelihood and rights, will focus on the issue of displacement caused by climate disaster (flood and erosion), slow onslaught impact (siltation and sand formation) and the implementation of two controversial mega hydropower projects in Xadiya, Assam.

CCERR was formed in response to the 2015 Cyclone Komen, and has since worked to bring a voice to locally affected populations concerning the level and type of governmental, donor, and NGO aid in response to natural disasters and climate displacement. During the next 18 months, CCERR will work with local women resettled in Hakha following the 2015 landslide. Through CJ FPAR, CCERR hopes to elevate women’s voices so that their needs are taking into account in ongoing and future rehabilitation plans in Hakha and in the surrounding areas.

Chetana campaigns to increase and ensure women’s access to and control over natural resources (land, forests, herbal plants) and focuses on the conservation of forests and indigenous knowledge of local resources, which are threatened by natural disasters arising due to climate change. The organisation will focus on organising women around the impacts of climate change on agriculture, displacement and health during FPAR.

Roshni is committed to promoting socio-economic justice to disadvantaged groups, including women. Through the FPAR, Roshni will work with rural peasant women from the Ghotiki district severely affected by a range of climate change impacts, to address diminishing land labour opportunities, the lack of decent wages, decreasing food security, and increased landlessness.  Women in this region make up the majority of labour, and have thus faced higher levels of marginalization as a result of these climate change impacts.

IWNT works to provide a gender perspective to development activities affecting Indigenous Peoples in Thailand. In an attempt to mitigate climate change, the Thai government began implementing stricter laws regarding deforestation. However, local and indigenous populations depend on subsistence agriculture, and find themselves facing increased challenges as a result of these new laws. IWNT will focus on the impact of climate change based policies on indigenous women whose livelihood depends on the surrounding forests.

ADC provides research and technology transfers for the sustainable development of ethnic minority in northern mountainous areas of Vietnam. ADC will work with on the resilience of indigenous women in response to climate change, particularly for the development of alternative livelihoods and adaption to lost local knowledge.