Skip to content
Home > Blog: Onward We March Without Leaving Anyone Behind!

Blog: Onward We March Without Leaving Anyone Behind!

Selvi Palani shares her reflections from attending the Commission on the Status of Women this year, with the theme of “Social protection systems, access to public services and sustainable infrastructure for gender equality and the empowerment of women and girls”. Selvi is with the Women Workers’ Union, Chennai, India.

My first Trans-Atlantic journey to attend the 63rd Session of the Commission on the Status of Women in New York was memorable in all the ways.   Although slightly familiar with the UN Treaty Body mechanism, having worked with Member States of the UN in facilitating preparation of their Alternate Reports to the CEDAW Committee; and as an Intern with the World Health Organisation (WHO, Geneva) who observed the working of the Open-Ended Working Group of the Optional Protocol to the International Covenant on Economic, Social and Cultural Rights in January- March 2005, nothing prepared me for the grandeur of the Inaugural to the CSW 63rd session. The CSW was a totally new learning experience that was both enriching and overwhelming.

APWLD’s side event on the impact of privatisation on public services, jointly held with Public Services International and FEMNET

It was a great moment to listen to Philip Alston, the UN Special Rapporteur on Extreme Poverty and Human Rights from close quarters. He focused on the ill effects of privatisation of public services. He emphasised that privatisation will lead to lack of accountability mechanism and the poor and vulnerable sections of society will be left totally in a the lurch. Those functions that are governmental need to be handled by such agency alone and privatisation will not pave way for realisation of rights. He cited the example of the UK National Audit Office that disclosed that the expenditure for private sector to run hospitals is higher than by the government. The private sector does not fall within the ambit of the Information Commissioner and consequently no access to information and ultimately accountability to the people is lost.

I was eagerly waiting to be called as an APWLD representative to make an intervention during the High Level Interactive Dialogue, but I along with several other CSOs were not given the opportunity due to paucity of time.  The State Representatives were asked to make a short representation on the activities or plans that they have formulated towards implementation of the Beijing Declaration and their plans for Beijing +25.

The Parliamentarians were recognised as a group and a Parliamentarian from Namibia and a representative from the African Union to the UN made their submissions.

The Media Group was also called upon to make their statement and a journalist spoke about the Global Media Monitoring Project being in force since 1995.  There is also a Global Alliance on Media and Gender that has been formulated five years ago.

From the private sector, a Google representative was given the floor.  She remarked that “Digital rights are women’s rights” and that there needs to be a gendered approach to the market.

It was disheartening to note that private sector preceded CSOs who were not called upon to make their submissions in the first phase.  I was constrained to leave the Conference Room due to my commitment to be a speaker at the Side Event organised by Kenya Human Rights Commission and FIDA Uganda (Women Lawyers Association of Uganda).

Reflections on my first visit to New York

New York is not just a city; it is an emotion, a feeling and I enjoyed every moment of my stay, while at work or just wandering around the places that are in the “things to do” in the city.  Thought it was officially spring season in New York, the temperature hovered between 2 to 4 degrees Celsius and I had every reason to enjoy it, knowing the sweltering heat that awaits me, when I reach my hometown, Chennai. 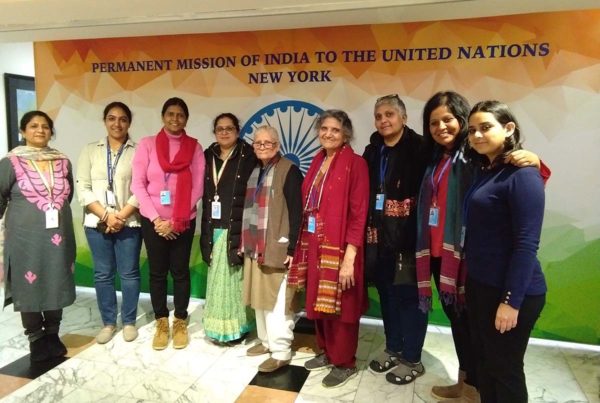 Selvi Palani (third from left, in pink) on the sidelines of CSW63 in New York. Photo: Selvi Palani

Travel by the New York Subway is an experience in itself, as that is perhaps the true way of learning about the city and its people. Since we were housed at a distance from Midtown Manhattan where the meeting places and the UN were located, travel by the subway was a necessity every day. Imagine, walking in and out of the Grand Central Terminal every day! By the end of the first week, I felt I have always lived in the city that showcases to the world the racial, cultural and ethnic mix of the globe. Several times I was approached by strangers asking me for directions or where to procure a mobile SIM card, which left me with a smile on my face and a spring in my step, making me act like a true New Yorker. The real deficit of the developing world is the lack of public spaces and the congestion that prevents you from walking and thereby pushing you to your own private vehicles. Walks were my solace and I made complete use of it, as I will have to wait for my next trip outside my country to walk with gay abandon.

What we strive for

It was a remarkable CSW 63 for me. I have done a cursory reading of the Agreed Conclusions and must admit that it is a far cry from what we have lobbied for language change. But that does not deter us as we will continue to strive to see that CSW will someday soon set global standards that will truly reflect the aims and aspirations of all the women without leaving anyone behind. We can critique the UN system, deride it for its ineffectiveness, but we need to keep working within it, until the system reaches the level for which it was originally ordained.

One windy evening, as I sat on the bench in Central Park and looked up to the sky, the only thought that arose in my mind is the immense gratitude that I feel towards APWLD for giving me an opportunity to attend the CSW 63 and explore select places of the country, of which I have only read and watched on screen.

Onward we march without leaving anyone behind!