Skip to content
Home > How Regional Solidarity helped Save a Life

How Regional Solidarity helped Save a Life

A year ago today Mary Jane Veloso, a Filipina migrant worker trafficked into Indonesia by a drug syndicate, was given a last minute stay of execution.  Her reprieve was the result of activism and advocacy across Asia Pacific. As globalization increases migration, exploitation and the power of transnational corporations and institutions, transnational activism becomes increasingly important.

In many ways Mary Jane’s story is a common one. A mother of (two) children, desperate to provide for her family, sought work as a migrant domestic worker. Despite being abused while working in Dubai, UAE, she accepted the assurances of an agent that she could find her better work. When that work fell through she followed the agent’s instructions and went to Indonesia with the promise of a better income. At the airport drugs were found in the luggage that had been given to her. She was charged, appointed a lawyer who she couldn’t communicate with, tried in a court she couldn’t understand and sentenced to death.

Her case went unnoticed until one of APWLD’s members, Migrante International, disclosed the case and began work to defend her and mobilise regional support. They gained the support of the National Union of People’s Lawyers  and alerted APWLD members and other allies. Several members responded and cross border activism began.

Indonesian migrant workers were amongst the first to respond. In Indonesia Migrant Care supported the case. In Hong Kong, Eni Lestari, APWLD’s Focal Person for migration and chair of IMA, mobilized Indonesian Migrant workers including Erwiana Sulistyaningsih, whose own case of brought international attention to the common, violent abuse migrant domestic workers face. APWLD supported her to write an opinion piece for the Jakarta Post  that shows ‘I could have been Mary Jane’.

Our member, the Indonesian Commission on Violence Against Women,  Komnas Perempuan investigated the case and concluded that Mary Jane was a victim of trafficking and her case needed to be reviewed entirely.

Our email to subscribers on our listserve resulted in support for Mary Jane’s case from a lawyer specializing in trafficking cases, Felicity Gerry, who immediately started assisting Migrante and Mary Jane’s lawyers with their case.

Migrante were included in APWLD’s delegation to the ASEAN People’s Forum where they mobilized more civil society support. 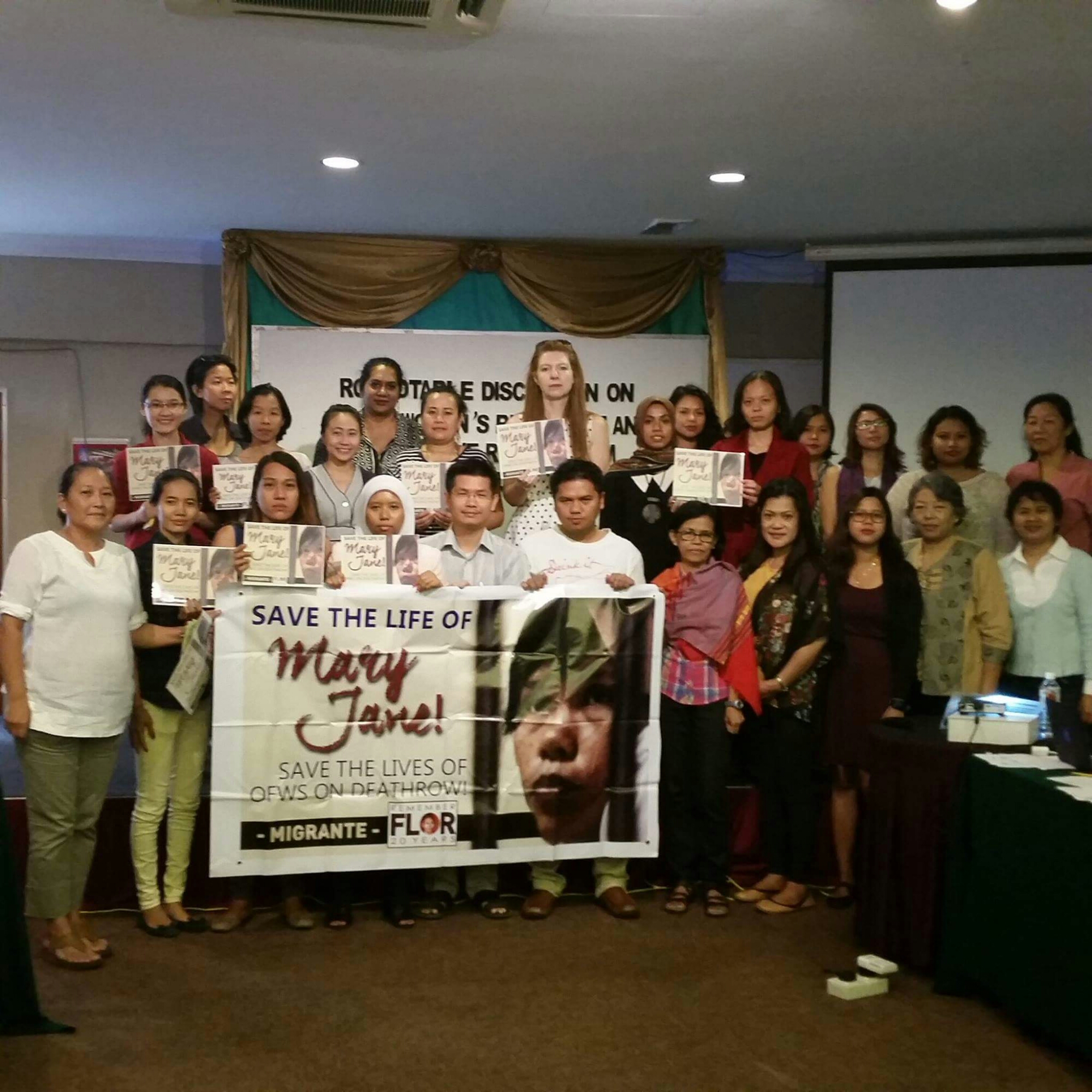 By partnering with the ASEAN Inter Parliamentary Association (AIPA) we held a dialogue with ASEAN MPs and were able to speak to Indonesian MPs about the case who promised to speak to the Minister.

But the most critical pressure remained the civil society mobilization taking place both in the Philippines and Indonesia which lead to increased media and global attention to her case. Finally Indonesian Prime Minister relented. While six men were executed that night, Mary Jane was not.

The case was a win for Migrante, civil society and regional solidarity. From this case we should derive strength but also lessons – cross border mobilizing and solidarity together with legal advocacy and support from institutional allies are all required to confront globalization and advance women’s human rights.