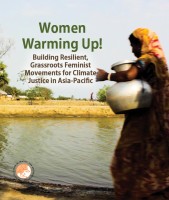 The Asia Pacific Forum on Women, Law and Development (APWLD) is releasing its regional report based on the results of its feminist participatory action research (FPAR) programme. This programme looked at the impacts of climate change on women’s lives in 8 countries in Asia and the Pacific: Bangladesh, India, Indonesia, Nepal, Papua New Guinea, the Philippines, Thailand and Vietnam. Our key findings include:

Climate change is an issue of gender and development justice

Women in the Global South, particularly women living in poverty, are more vulnerable to the impacts of climate change. They are exposed to increased risks because of their primary role in care work and agricultural production and because climate change is increasing the burden of water and food collection, which usually falls on women. For example, the indigenous women of coastal areas of Bangladesh and of the remote mountainous region of Nepal are struggling to survive as they are losing their agricultural lands due to salinity and landslides respectively. In the Philippines, women constituted the majority of the death toll caused by typhoon Haiyan. In the Carteret Islands in Papua New Guinea, women farmers that have been displaced from their home islands due to rising sea levels are now struggle to feed their families in the relocation areas and face increased levels of gender-based violence.

This is unjust because these women have contributed the least to climate change and yet are bearing its greatest brunt. Women of the Global South are owed an historic debt given the development and industrialisation of rich countries has been at their expense.

The importance of a transition to just and equitable economies

To repay this historic debt and allow women from the Global South to survive, we need an unprecedented shift in the ways societies are organised. The shift must deliver an equitable development model that enables the redistribution of wealth, resources, power and carbon between countries, between rich and poor and between men and women. This embodies the need to challenge the common roots of the interlinked crises of inequalities and climate change: a global economic system dependent on increasing unsustainable production, consumption and resource extraction that concentrates profits and power in ways that have served to subvert democracies and a more equal distribution of resources.

If we are to challenge the roots of the climate crisis while addressing its gendered impacts, we must support and strengthen local women’s movements, in order to engage with local authorities and shape localised climate adaptation policies. Women’s movements, networks, collectives and organisations have been critical to addressing the threats and responses to climate change and yet are often left out of policy decision-making. Without women’s movements, it will not be possible to develop gender equitable policies, protect women’s human rights, curb deepening inequalities resulting from climate change and transition to more equitable and just economies and communities. They are a critical element of the means of implementation. Women’s organising to advance climate justice has acted as a catalyst for women’s democratic engagement in local decision making.  For example, in Vietnam, women’s groups who participated in the FPAR programme have succeeded in including 60 local women in the historically male-only Village Rapid Response Teams in charge of preparedness and management of disasters. Besides participating in the usual activities of the team, the women have build on feminist collectivity in practical ways. They have organised themselves into a sub-group to conduct their own activities, such as starting a movement within their communities called “Green and Clean Roads in the Village”.

“The first day of joining the rapid response team, there were a small number of other women whispering that this is the work of men and those women should never do it. But some time later, when we women were cleaning village roads and helping the community during a disaster, everyone started to change their views and behaviour. Now others are saying that it is true that women can also do the work that previously man only did!” –  Mrs. Nguyen Thi Hoa, Hai Duong Commune, CJ-FPAR participant

Climate change mitigation and adaptation projects have the potential to undermine women’s rights, displace people and increase resource and wealth inequalities. To avoid this there must be compulsory, systematic, ex ante gender impact assessments and impact-reporting on gender indicators. The active participation and decision-making in the projects of women’s local movements and free, prior and informed consent of Indigenous women must be a core safeguard.

Based on these key findings, APWLD is going to COP 21 with women living on the frontline of climate change and to demand climate justice, and in particular that governments: