Skip to content
Home > Four wins at CSW61 this year

Four wins at CSW61 this year

The UN Commission on the Status of Women this year took place in a hostile climate – both inside and outside the UN. Temperatures outside fell below zero and Blizzard Stella shut down the UN for a day. Inside, there was a hostile culture with registered ‘hate groups’ included in the official US delegation and repeated state references to rigid concepts of family, suggestions that unpaid care work are ‘cultural’ and a pleasure for women as well as familiar resistance to sexual reproductive health and rights, sexual orientation and gender identity. 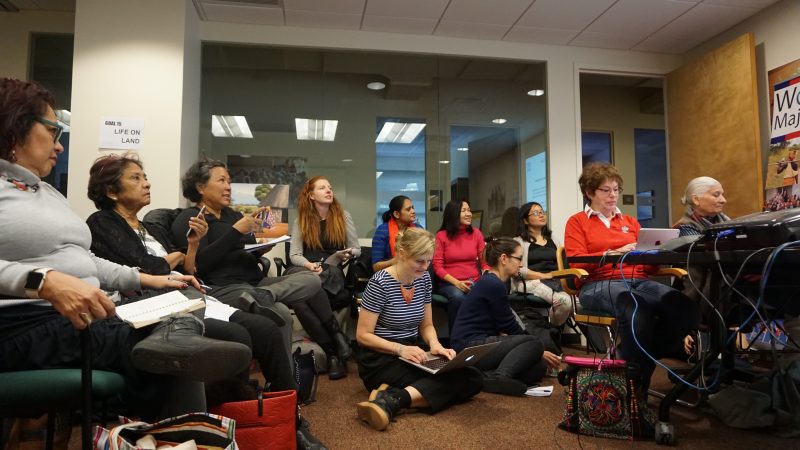 The focus of the meeting was “Women’s economic empowerment in the changing world of work” and, as is often the case, much of the time negotiating was taken up trying to defend existing language and commitments. Russia and the US teamed up to oppose inclusion of language around labour rights, arguing against references to specific International Labour Organisation (ILO) conventions and obligations as well as the role of the ILO in implementing obligations to deliver Decent Work for women. They also blocked the inclusion of the right to a ‘living wage’, something the US has opposed for years.

But within this hostile climate there were some wins. And we should celebrate our wins, given that they are increasingly rare and hard fought. Four things that were achieved for the first time in the Agreed Conclusions:

APWLD and many allies in feminist, climate and labour rights movements have been making the case for the transition to low carbon economies to be planned in ways that are gender-just and equitable. The concept of a ‘just transition’ was included in the Paris Agreement, a big win in the fight to recognize that workers displaced by climate change deserve justice. But we wanted that concept to be broadened and to commit to planned transitions that address the sexual division of labour and imagines economies that are more gender equitable and sustainable for all people. The language in paragraph 40.hh is a great first step to doing that:

Lobbying to get this into the Agreed Conclusions took a lot of work, not just at CSW, but in preparatory meetings and at the UNFCCC COP.  We prepared a fact sheet for CSW documenting a bit of the negotiated background that you can read here. Thanks to the Philippines delegation and the Pacific Islands governments for championing this paragraph and the other on climate change, to UN ESCAP and UN Women Asia Pacific for including the concept in the regional preparatory meeting and the civil society solidarity between trade unions and feminist climate activists (such as DIVA), we have taken a step toward a shared vision for a Feminist Fossil Fuel Free Future.

There’s a lot of evidence that the obscene and growing levels of wealth and income inequality are, in part, a result of the loss of trade union density and power. Even the IMF has recognized that higher trade union density results in lower inequality and the ILO found that collective bargaining agreements play a key role in reducing inequality and gender wage gaps. This link hasn’t been explicitly recognized in intergovernmental text before, but at CSW, governments included a new paragraph that drew these links together:

Earlier versions of the paragraph included stronger recognition of the negative impact globalization has had on inequalities and the gap between minimum and living wages. The proposed paragraph drew from various sources we had compiled and was championed by Canada (thanks to the strong presence and persistence of Canadian feminist trade unionists).

Target 5.4 of the SDGs requires states to recognize and value unpaid care and domestic work through the provision of public services, infrastructure and social protection policies, and the promotion of shared responsibility within the household and the family. The Agreed Conclusions went further in detailing the obligations and the public services that should be covered committing governments to: 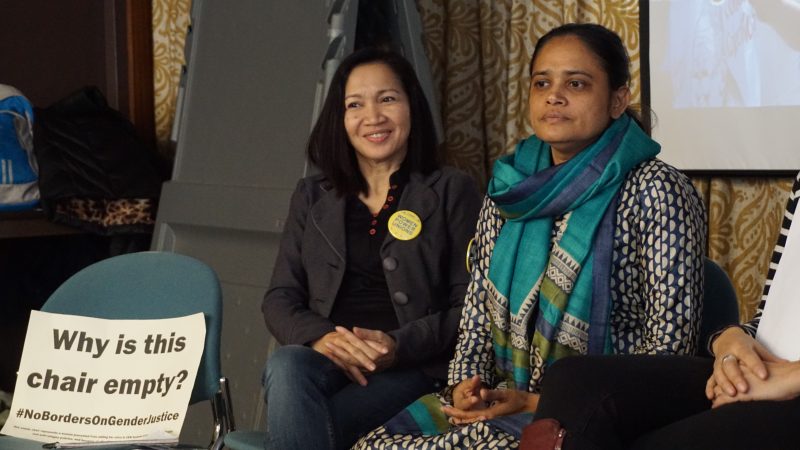 APWLD and other organisations marked the absence of civil society representatives due to visa refusals with empty chairs at side events. Pictured are our Labour Organising Committee Focal Points, Daisy Arago (l) and Nazma Akter (r)

4. Recognising the Declaration on the Rights of Indigenous Peoples

The ‘emerging issue’ of this year’s CSW was officially the ‘empowerment of Indigenous women’ (obviously not just an emerging issue but every year has a ‘priority theme’, ‘review theme’ and an ‘emerging issue’). Given the inclusion of the rights of Indigenous women in the official agenda they seemed to get little attention in either the negotiations or the formal side events. The agreed conclusions did include an important connection for the first time to the Declaration on the Rights of the Indigenous Peoples’ (DRIP): 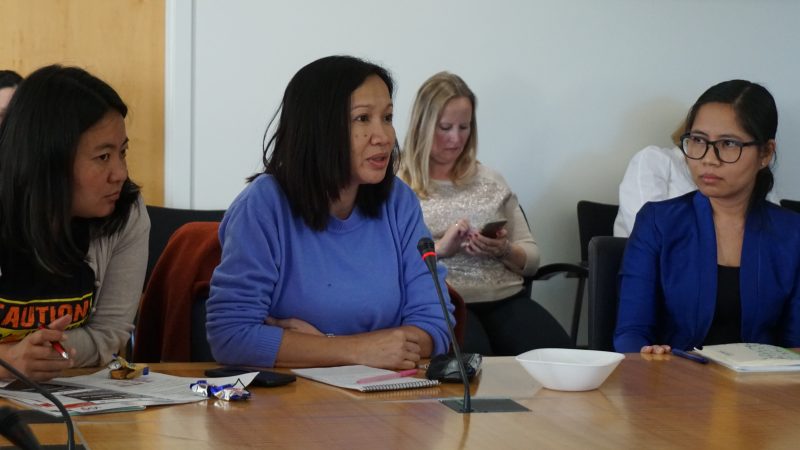 Given the difficulty of getting non-consensus declarations and conventions referenced into the text, this was an achievement even though the earlier version recognizing the right to Free, Prior and Informed Consent (FPIC) was deleted and replaced with an unacceptable ‘promote their participation in relevant decision making’. APWLD members and other civil society held a meeting with the Australian delegation facilitated by the Australian National Human Rights Commission where they committed to championing this paragraph (having included Australian Indigenous women leaders in their delegation) and were also surprisingly supportive of the range of issues raised by civil society at the meeting. 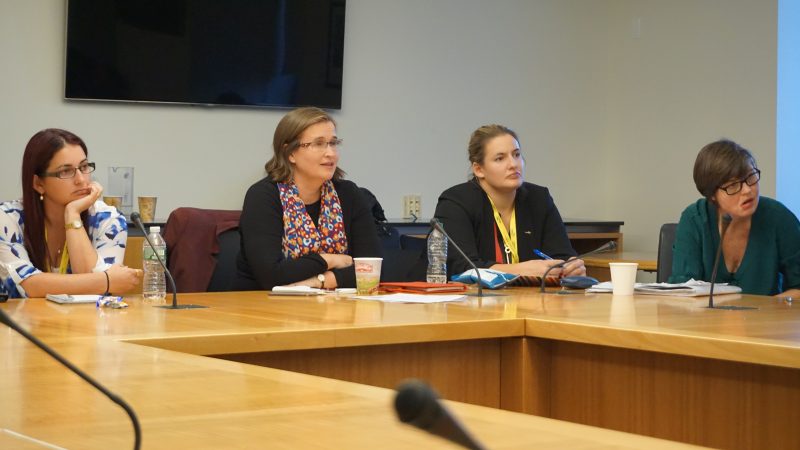 At the Asia Pacific NGO Dialogue held by the Australian Human Rights Commission, Sex Discrimination Commissioner Kate Jenkins (second from left) and other members of the Commission listen to civil society representatives

Given how difficult it can be to achieve any progress within UN intergovernmental spaces, it is now critical that these small steps be followed up with action at the local and regional levels. While often the Agreed Conclusions are simply consigned to the UN archives and useful only to reference at future meetings, APWLD will be following up on the new commitments to offer proposals for the just transition required to deliver Development Justice to women in our region and globally.