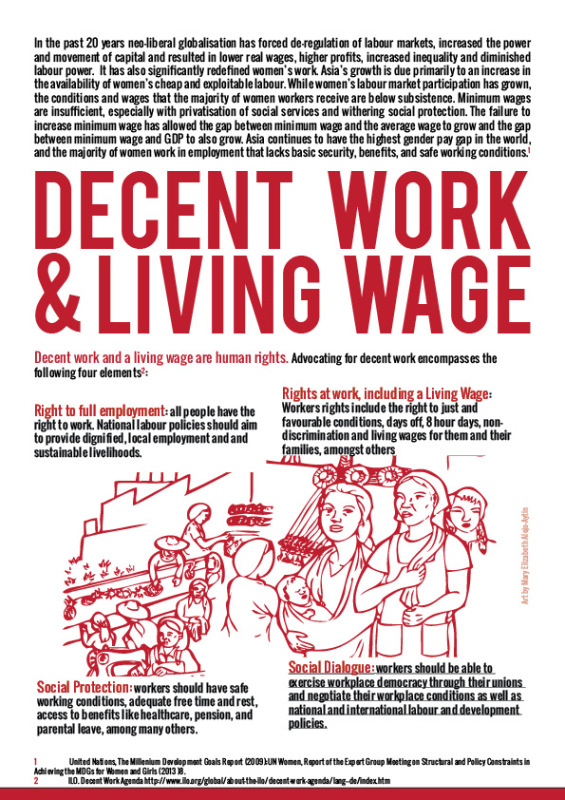 What is the issue?

In the past 20 years neo-liberal globalisation has forced de-regulation of labour markets, increased the power and movement of capital and resulted in lower real wages, higher profits, increased inequality and diminished labour power.  It has also significantly redefined women’s work. Asia’s growth is due primarily to an increase in the availability of women’s cheap and exploitable labour. While women’s labour market participation has grown, the conditions and wages that the majority of women workers receive are below subsistence. Minimum wages are insufficient, especially with privatisation of social services and withering social protection. The failure to increase minimum wage has allowed the gap between minimum wage and the average wage to grow and the gap between minimum wage and GDP to also grow. Asia continues to have the highest gender pay gap in the world, and the majority of women work in employment that lacks basic security, benefits, and safe working conditions.[1]

Living Wage is part of the Decent Work agenda and it is a wage that can support a family to live in dignity. A living wage should be calculated on the costs of a basket of goods that would include sufficient calories for a family (using the local dietary habits) and a similar amount for non-food costs including housing, and clothing, energy and material goods. Living wages should accommodate for the multiple forms of family, the reality of care work that women often provide for children, extended family and other dependents.

The Millennium Development Goals used the starvation rate of USD1.25PPP per day to measure wage poverty. Using this measurement and simultaneously targeting productivity increases, the goals contributed to the freezing of real wages and increasing inequality. Poverty wages force workers to work lengthy hours of overtime, to forgo health and safety standards, to go into debt, to sacrifice their families’ education, health and well-being.

Why does it matter to women in the region?

Women workers comprise the majority in the garment industry, service industries and agricultural subsistence farming.  And the majority of women workers in Asia continue to be employed in ‘vulnerable employment’.[3] Domestic work is the most common occupation for women in Asia, accounting for one-third of all waged female employment and employing 21.5 million people, of which approximately 80% are women.[4] It remains to be among the lowest paid, least valued, and least organized sector.

In the Asia Pacific region, the average real wage growth between 2006 and 2011 as reported in the ILO Global Wage Report shows a positive trend. However, if China is excluded from the data then it shows a different picture. The estimates show that for 2011 the growth rate would be 5%, but after excluding China the rate falls to minus 0.9%.[5] Wage setting mechanisms have historically devalued women’s work and assumed women do not require wages sufficient to support dependents. Additionally, because women are more likely to work in informal sectors they are more vulnerable to exploitation, discrimination and dangerous working conditions. The status of decent work for women is also exacerbated by the burden of unpaid care work. Gender norms and patriarchal inequalities force women to shoulder the unpaid activities required to care for others through cooking, cleaning, taking care of children, the ill and the elderly in addition to their paid work. In the most vulnerable sectors and within the home, global economic growth has been achieved by increasing the labour burden on women.

What is the status of the issue in the post-2015 negotiations?

In the Open Working Group Proposed Sustainable Development Goals Decent Work is hidden in Goal 8: ‘Promote sustained, inclusive and sustainable economic growth, full and productive employment and decent work for all’. It is concerning to see the merger of Decent Work with growth. It also positions decent work as a result of growth rather than an obligation. Decent work and wages were also mentioned in the following targets:

Target 8.5 by 2030 achieve full and productive employment and decent work for all women and men, including for young people and persons with disabilities, and equal pay for work of equal value

Target 8.8: protect labour rights and promote safe and secure working environments of all workers, including migrant workers, particularly women migrants, and those in precarious employment

The additional reference in Goal 10: Reduce inequality within and among countries could be used to advocate for living wage indicators:

10.1 by 2030 progressively achieve and sustain income growth of the bottom 40% of the population at a rate higher than the national average

The Seceratary General’s Synthesis Report focused on access to employment but does not refer to the essential elements of rights at work nor social dialogue. However, it is refreshing to see that the Synthesis Report referred to a living wage which should be incorporated in the SDGs indicators.

What are we demanding?

We demand a development framework that aims to ensure workers, families and communities can live in dignity. We want indicators that ensure references to income and wages translate to a universal commitment for a living wage.

The current targets should have indicators that include:

What can you do?

Fair and just conditions of work, including living wages, are essential to Development Justice. Transforming development requires a transformation of labour practices, it is particularly imperative to articulate measures for decent work and living wages that apply to informal sectors and migrant workers.

A common living wage or floor wage would have multiple development benefits for workers but also for the economy. Many companies are wary of adopting a living wage for fear it will mean being priced out of the market.  Universal calculations for living wages would prevent capital flight in search of the lowest possible labour conditions. Living wages also stimulate domestic markets and increase much needed tax revenue.

We need coordinated global actions to advance decent work and living wage.  Join us on the Global Campaign for Decent Work and Living Wage!

The final negotiations for the Post-2015 Development Agenda is scheduled for July 2015. We need to hold our governments accountable and influence their position in the intergovernmental fora.

For more information or to let us know about your work please contact us at Leanne@apwld.org

[1] United Nations, The Millenium Development Goals Report (2009);UN Women, Report of the Expert Group Meeting on Structural and Policy Constraints in Achieving the MDGs for Women and Girls (2013 )8.

[3] UN defines this as the percentage of own-account and unpaid family workers in total employment.