Skip to content
Home > Campaign Toolkit: 12 Days of Action For The Philippines

Campaign Toolkit: 12 Days of Action For The Philippines

12 Days of Action for the Philippines

Why the Philippines and Why Now?

In the past two years the situation of human rights and democracy in the Philippines in general and women human rights defenders in particular have gone from bad to worse under the Duterte Administration. The alarming statistics are rising with 196 Extrajudicial Killings, 415 cases of political detention under trumped-up charges, and over 70,000 cases of harassment, threats and intimidation against W/HRDs.  Almost every possible regional and international human rights venues have been exhausted but the government has decided only to either ignore recommendations from those processes oreven harshly suppresses dissenting voices and peoples’ resistance calling for human rights, justice and accountability. Now it is more than ever clear that changes can happen only through peoples’ organising, mobilising and solidarity support.

We need your solidarity and actions so that people in the Philippines continue to resist with hope, and for the Duterte Administration to feel even more threatened by the international community’s solidarity outcry and surrender its power back to people’s sovereignty.

✍ Actions you can take

1. Sign on to the letter to President Rodrigo Roa Duterte to cease attacks on women / human rights defenders in the Philippines.

2. Send your own letter to the President Duterte urging him to stop the attacks on WHRDs

4. Take a selfie or a photo-op using any of following hashtags and share them on your social media channels:

You can also share a solidarity video or photo messages to WHRDs in the Philippines. 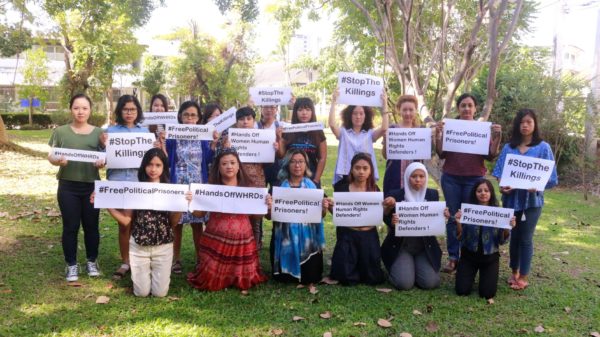 Sample photo of solidarity action for the Philippines.

5. You can also change your social media banner to support the Global Solidarity Action for the Philippines using the following images: 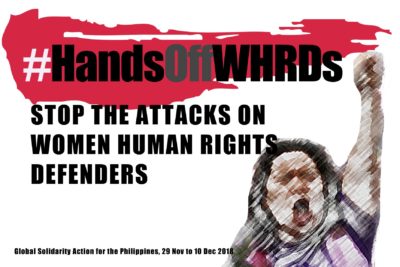 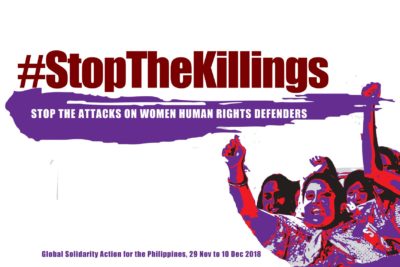