Blog Post: APWLD And Our Members At HLPF And GLPF

The High Level Political Forum (HLPF) on the Sustainable Development Goals (SDGs) got a second iteration this year with 43 member states carrying out the Voluntary National Review, 13 of which are from Asia Pacific. The nine-days HLPF consisted of review of sets of Goals (1, 2, 3, 5, 9, 14) as well as Goal 17 followed by three‐day Ministerial Segment where 43 countries presented their VNRs on the theme of “Eradicating poverty and promoting prosperity in a changing world”.

Even with more than 2000 representatives of stakeholders group present in New York city, many women from developing countries and the global south weren’t able to come. This followed the continuous trend of the current US government refusing visa of civil societies’ representatives.

The pre-negotiated Ministerial Declaration that was supposed to have been a done deal, saw a little drama at the 11th hour when 4 countries broke silence, US over a line on the WTO, Israel over “foreign occupation”, while Australia and Canada both broke silence on what was felt was an insufficient language on gender equality and private sector. The final Ministerial Declaration adopted was  the same one the HLPF started with, and seemed to reflect only the minimum agreeable points member states could agreed on, with nowhere near the level of ambition the 2030 Agenda was about.

The Voluntary National Reviews (VNR) segments on the other hand, were a fast revolving podium of 43 member states, with very little time for questions and answer by other member states and even less time for civil societies. Iran pulled out of the VNR seconds before they were due on the podium, representative of the Indonesian  government intimidated CSO representatives from asking certain questions, while India refused time for CSOs to ask questions . This was far from a stellar example of genuine accountability let alone democratic participation.

All throughout the HLPF process, APWLD along with Asia Pacific Regional CSO Engagement Mechanism (APRCEM) and the Women’s Major Group (WMG) were present and here are some of things we were up to:

This year’s HLPF also saw the very first Ground Level People’s Forum (GLPF)  co organized by APWLD, APRCEM, BAYAN-USA, CSO Partnership for Development Effectiveness (CPDE), ESCR-Net, Gabriela-USA, Women’s Environment & Development Organization (WEDO) and endorsed by the WMG. The GLFP convened diverse movements, constituencies both locally and outside from other regions, even as the United Nations and the High Level Political Forum (HLPF) continued to ignore these voices. Through this forum, we are strengthening solidarity across movements and across regions and creating alternative spaces for people’s movements. 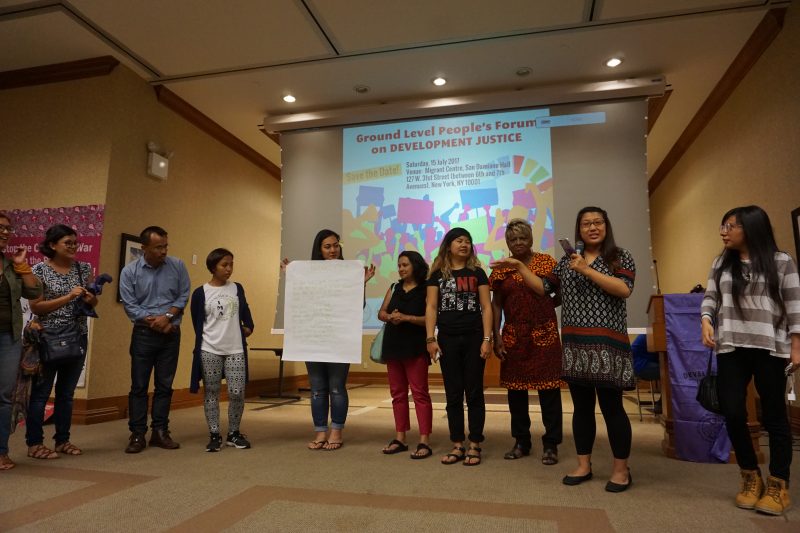 APWLD member Nalini Singh of the Fiji Women’s Rights Movement was one of the panel discussant on the review of Goal 5 where she highlighted how patriarchy, militarism, neo-liberal trade and investments agreements and continuous land and resource grabbing are all evidences of “business as usual” with states everywhere. Our member Eni Lestari made an intervention on Means of Implementation (MOI) and financing of the SDGs, reminding states not to trade women human rights with money and vice versa. In total, members of the APWLD delegation spoke at four side-events, made three interventions as part of the formal HLPF process  or asked questions as part of their countries’ VNR process and helped shaped the CSOs questions of two other countries. 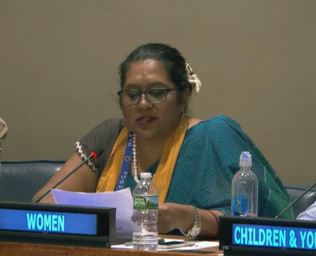 Our members from Malaysia, Indonesia and Thailand worked with civil societies back in their home countries and at the HLPF to formulate questions to governments during their respective VNR questions. The questions to Malaysia and Thailand highlighted the growing inequalities within both countries and how the government’s intend to ensure the participation of civil societies and people’s movements in SDGs implementation. APWLD partners WOREC Nepal and Foundation for Women Thailand also released their own People’s Development Justice report on the monitoring and review of the SDGs implementation in their country. 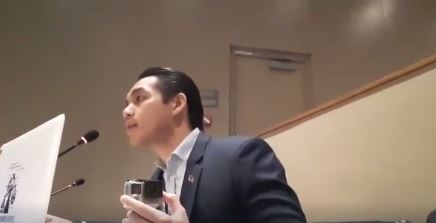