Skip to content
Home > Blog: Our Feminist Demands for COP24

Blog: Our Feminist Demands for COP24

As UNFCCC Climate Change Summit COP24 begins in Katowice, Poland, APWLD expresses our feminist demands to the convening governments on the importance of upholding human rights obligations in implementing climate change mitigation actions. Shrinking civil society space in these climate negotiations also shows the lack of democratic participation in all COP processes, considering the fact that climate change has brought devastating impacts on women, communities and other minorities, and continues to marginalise them further. Moreover, the sheer presence of oil, coal, mining and other extractive industries in these negotiations shows how governments collude with them to prioritise profit over people. Read our full list of feminist demands below:

States must uphold international human rights laws in the drafting of the Rulebook, and not just limit the references to preambular language. 2017 and 2018 have witnessed increasing violence against women human rights and environment defenders in countries of the Global South. This is a result of continued operations of extractives and polluting industries backed by States and Multilateral Development Banks alike, which makes its way as project proposal into Green Climate Fund, without due diligence in its FPIC (Free, Prior and Informed Consent) with women, indigenous persons or marginalised local communities. Peoples’ movements in Indonesia and Pacific have been opposing large-scale “false” solutions like biomass and geothermal power plants that do not take into consideration the fragility of the ecological landscapes or violation of peoples’ right to life in decent and safe environments.

#2 Pay attention to Loss and Damage

Action to address loss and damage from climate change is an independent pillar of the Paris Agreement (Article 8). 2018 has been a disastrous year especially in South and Southeast Asia bearing the brunt of unpredictable monsoons, cyclonic storms and natural disasters, destroying properties, livelihoods and lives of the people who continue struggling to recover from these losses. With 2018 also being the 5th year of Warsaw International Mechanism for Loss and Damage related to Climate Change, the Polish Presidency must aspire to go beyond a celebratory event and guide States at COP24 to develop a coordinated approach together with other international frameworks on climate induced migration and displacement. In addition, L&D finance needs to be formally acknowledged, integrated into the Financial Mechanism of the UNFCCC in the form of grants and be readily mobilised as urgent response to the communities most affected, including women and other minorities. 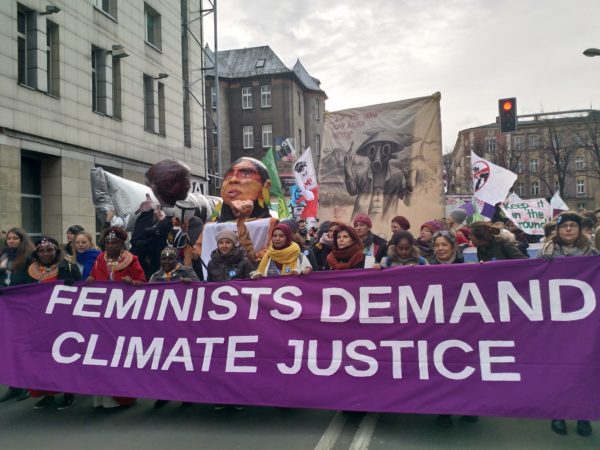 Recent reports from IPCC and IEA this year have pointed out that achieving 1.5 degree target from reducing Greenhouse Gas (GHG) emissions now urgently require much bolder and effective actions than what is being done – the world has no capacity to absorb any more new fossil fuel plants. The implementation guidelines for Paris Agreement being set at COP24 needs to address and accept this reality in its climate ambitions as well as commitment to safeguard the Right to Life, as urged by the High Commissioner of the Office of Human Rights and Pacific States. States, especially the developed countries, need to be made accountable with enhanced transparency frameworks for reporting NDCs and climate finance accounting. This ensures that States do not over-report their actual impact, that financing for climate does not become an excuse to continue in their path of business as usual with the fossil fuel industries.

Fossil Fuel Free Future requires a just transition that implies a shift from jobs in carbon polluting industries to green and decent jobs in sustainable, clean and renewable sectors. To be fair and equitable, this transition must also challenge the gendered-division of labour, which places women in often low waged, insecure and informal subsistence. This is especially prevalent in Global South where factories from developed countries put women at poverty wages in precarious work, without social protection or means to represent themselves. Gender Action Plan must look beyond data and capacity building, but also aid States to invest in public services and decent, green jobs, including care economy, which is crucial for realising just and equitable transition especially in Asia-Pacific.

Promote a shift away from the industrial food system, including industrial livestock farming, to localised agro-ecological based food systems in the hands of smallholders farmers, including women, that deliver food sovereignty. Rural and indigenous women can play an important role in facilitating a transition towards a more equitable and sustainable economy. They must not, however, be required to shoulder the burden of the world’s mitigation and adaptation obligations. Gender-responsive, ecosystem-based, community-driven and holistic approaches to climate change mitigation and resilience that are essential for women’s livelihoods and for the planet must be at the core of all climate actions and solutions.. The right of peasants and other rural people, including women to contribute to the design and implementation of national and local climate change adaptation and mitigation policies, including through the use of agroecological, sociocultural and economic environments, practices and traditional knowledge, has been recognised by the recently adopted UN Declaration on the Rights of Peasants

#6 Uphold democratic participation in Global Stocktakes and all COP processes

The facilitative Talanoa dialogues convened in COP23 to take stock of the progress of parties in realising the long term goal of the Paris Agreement, and was structured around three asks: ‘where are we;’ ‘where do we want to go;’ and ‘how do we get there.’ But an important 4th question was left out: ‘how did we get here;’ this, as claimed by developing countries, ignores the historical responsibility of developed countries. While the Talanoa dialogues facilitate communication between and among parties, it must not relegate to the background the common but differentiated responsibilities (CBDR) core principle of the Paris Agreement.

There must be continued consultation with civil societies and grassroots communities in the Global Stocktakes, ensuring access to information and democratic participation in policies and solutions, and right to expression without threat or intimidation from States. Precedents such as this year’s UN decision of working with oppressive governments like Poland violates the Paris Convention, UN principles on human rights and European Union’s Aarhus Convention and enables the increasing threats to environment and human rights defenders and shrinking civil society spaces. The “Special Bills” related to COPs that subject everyone to undisclosed State surveillance, is a grave concern for women from the Global South on personal and organisation levels who will likely to be subjected to such scrutiny.

Replenishment of funds must be as per the guidance of Standing Committee on Finance and remain in the purview of UNFCCC provisions. While States are failing to mobilise their USD 100 billion per year target, UN agencies in consultation with civil society groups must take it on themselves to guide governments to adopt in innovative sources of public finance such as a global financial transaction tax, the redirection of military budgets, additional taxes on arms trade, extractive and shipping industries, the elimination of tax havens and tax evasion from transnational corporations and wealthy individuals. The most significant shifts come by strengthening Public-Public Partnerships for transitioning to universally available renewable and clean energies that are also crucial to gender equitable outcomes as well as Paris ambitions.