Blog: Climate Negotiations A Disappointment, Time to Act is Now

So while a few governments did celebratory dances[3] on a ‘successful’ COP24 under Polish Presidency, was it a complete setback for those who felt disappointed? Not really. If we look at the broader outcomes from the decisions that were laid out across 130-odd pages of informal text that were released under UNFCCC[4], we might get the impression that everything was in place for operationalising the Paris Agreement. On closer inspection,  it is merely a vague text with no proper accountability or mechanisms to bring down the global average temperature to below 1.5 degree Celsius by 2030 by reducing emissions. There has been a significant dismissal of references to human rights (opposed by USA and Saudi Arabia) in the implementation guidelines[5], which is problematic in achieving climate justice[6] in the current geopolitical dire straits.

Even the utmost important aspect of loss and damages was left unaddressed and crucial for reparations. Climate change and disasters induced displacement, a classic example of developed countries and corporations not owning up to their historic and current responsibility of causing climate change, has to be addressed globally. 2018 has been a disastrous year with especially South and Southeast Asia bearing the brunt of unpredictable monsoons, cyclonic storms and natural disasters, destroying properties, livelihoods and lives of the people who continue to struggle to recover from these losses. The needs of those most affected, including women and sexual minorities[7], migrants, people with disabilities and other discriminated, communities-at-risk, must be taken into account financially. Instead, climate frontline states are being asked to pay high premiums for disaster risk insurance to companies from the Global North.

The most basic response to climate change from developed countries in the last decade of climate negotiation has been to just offer finance and technology under standard response measures such as adaptation and mitigation. But in the new outcome, we find that the so called ‘ambitions’ have been remarkably cut down[8] instead of ramping up measures for emission reduction. At COP 24, technology-centered carbon markets and their failed solutions[9] were plastered on pavilions and side event rooms, pushed by the world’s most polluting industries[10] parading themselves as ‘climate champions’.

“Article 6 of the Paris Agreement created both market (articles 6.2 and 6.4) and non-market mechanisms (article 6.8) through which Parties could cooperate to achieve their mitigation goals. Market mechanisms include trading of internationally transferred mitigation outcomes or carbon credits and through project-based emissions credits via the so-called “sustainable development mechanism. Non-market mechanisms allow for collaboration and coordination between parties to enhance mitigation and adaptation ambition”, as quoted from CIEL adds to why this matters to grassroots organising for climate action – without non market mechanisms to measure climate project impacts, there will be no funding available directly for communities to get access and take ownership of managing their local resources[11].

In the Finance commitments, references have been made to “urge” developed countries to meet their existing financial commitment of USD 100 Billion per year by 2020. ‘But collective goals are arguably the most useless of the tools to get climate finance flowing. Absent any formal methodology for deciding which countries bear responsibility for what share of the overall goal, they fail to put meaningful pressure on individual governments to provide finance[12]’. This is because countries often over report or dub existing development aids as climate finance, meaning there is actually no new or additional finance made available to developing countries (Norway[13] for instance)  to help their transition from fossil-fuel dependent economies. 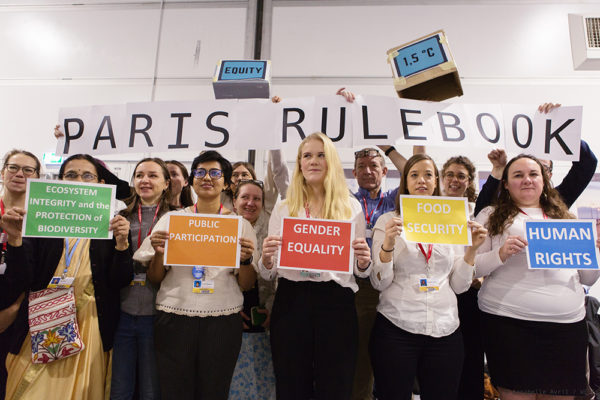 Where Are The Women?

Could we owe this lacklustre display of dull decisions to the lack of representation?

A study reported that there has generally been an upward trend in the representation of women over time. WEDO’s statistics show that in 2008, women led just 15 percent of delegations, and made up just 32 percent of these participants in total. ‘In some ways that’s encouraging—although it is notable that the number of women leaders dropped dramatically in 2015, the year the Paris Agreement was negotiated and signed. But progress is certainly not happening fast enough: At the current rate of change, gender parity will only be achieved by 2040[14].’ While this time Kyrgyzstan made a record with a women only delegation, one of their representatives was concerned that having gender balance or representation in itself was not enough and this talk required specialists as well, so why is it difficult to understand why they can’t be both. This point is illustrated well below –

“While the needs for specialists is inarguable, what worries those who criticise the male-dominated makeup of the dialogues is that it will skew priorities (in addition to reinforcing patriarchal notions of who gets to make important decision). An Oxfam report from 2009 talks about how market-centric approaches to climate policy may actually make matters worse if they don’t consider the social roles assigned to men and women. And by having no women with a clear gender perspective on the differential impacts of the climate change, present, it will become much easier for those making the decision to ignore their concerns.[15]”

More importantly, all these references to including gender ‘perspectives’ and gender ‘responsive’ measures in reporting and planning don’t mean anything if countries fail to abide by the agreed principles in the Preamble of Paris Agreement[16], and continue their development pathway without recognising inequalities within and among countries that increase vulnerabilities across the gender spectrum. Again initiatives such as Local communities and Indigenous Peoples platform[17] that promises to ‘strengthen the knowledge, technologies, practices and efforts of local and indigenous communities in addressing and responding to climate change, facilitate the exchange of experiences and best practices and lessons on mitigation and adaptation’, would  fail to deliver anything if measures to address climate responses do not champion human rights, inclusive decision making and public participation in decision making without threat or intimidation.

Celebrating such ‘wins’ and a bunch of declarations[18] from COP24 seem to downplay the inaction in light of the severity of the current climate and economic breakdown.

In these situations we often look to the science of issues such as climate change. So when countries requested IPCC to prepare an urgent study[19] of the state of climate change, they released the Special Report on Global Warming of 1.5°C in October 2018 to help countries make decisions at COP24. What took place however was a dismissal of the report by a few powerful countries like USA, Saudi Arabia, Russia and Kuwait[20] and created doubts among the rest of the countries[21] about the suitability of report to base decisions on. The report especially emphasised radical energy transformation, no more burning and also highlighted the importance of democratic decision making for any policy to work, to  keep the world safe from impacts of climate change. Despite this compelling document clearly stating the pros and cons of delaying action and scientists present at COP24[22] pleading at every session for countries to listen, in the end it was the private businesses that lobbied for problematic solutions like gas and nuclear energy that caught everyone’s fancy (and brickbats from activists, few of whom were debadged for dissenting openly[23]).

If the formal negotiation and UNFCCC process failed Paris Agreement and humanity, wherein lies the hope then? Despite the rise of authoritarian and toxic macho-fascists dictating our political, economical and moral systems, there has been an irrepressible pushback from feminists[24], grassroots and activists against this corrupt system. Organising has taken form as marches, sit-ins, walkouts and every possible democratic and non violent dissent in these spaces. But this year was even more inspiring with the advent of Climate Strikes[25] organised by school students across Europe. This was started by Greta Thunberg, who was also present at COP24 to hold signs and remind governments that it is their responsibility to safeguard futures[26]. Till date more than 25 (and counting) independent school strikes are taking place on Fridays to strengthen her message.

Another breakthrough in activism took shape with a surge in litigation cases against corporation and governments responsible for climate change. Across the world[27], frontline communities[28] and their allies are coming forward to bring their causes under rule of law[29], ensuring that there is compliance to such agreements and environmental principles in order to protect their right to live in healthy, safe and dignified conditions. Damages are being sought to be compensated from the wealthy few who have been benefiting from the relentless exploitation of common resources. Green organisations have issued a call to tax them[30] and route these funds to repair and restore lives and livelihoods to communities at risk from climate change impacts. Women from Asia Pacific have been advocating for development justice and feminist fossil fuel free futures[31] in their vision for climate action.

Such a world would require a dramatic revisioning enabled by just and equitable transitions as well as ecological conservation[32]. So far the mainstream development agenda has hijacked terms like ‘mitigation’, ‘resilience’ to continue the business-as-usual (clean coal for instance) countenance. These policy makers appear to work with workers while reducing the approach to just transition to a singular frame that only looks at creating/protecting jobs in the  workforce. But a just and equitable transition cannot happen without putting gender considerations and ecological justice at its core. It remains a challenge to make people at the forefront of climate action to understand that our realities and systemic oppression is intersectional; interventions target the problems without recognising the barriers such as neoliberal economic models, entrenched patriarchal practices, proliferation of bilateral and multilateral trade and investment treaties, and arms race that block human rights and threaten the stability of our planet itself.  Enabling transitions from this is not just about changing our fossil fuel dependency, it needs changing the extractive nature of our economies and reducing inequalities of wealth and resources that haunt our society.

In an equitable transition, rural and indigenous women  play an especially important role as stewards of environment and communities. Workers are not an isolated entity; they are part of communes and communities that benefit by enabling women’s collective power, democratic decision making and increasing public investments in commons[33]. It also requires that governments and corporations with vested interests against such a transition are refrained from threatening or harassing women human rights and environment defenders, and that there are statutory regulations for corporations in their domiciled country for judicial remedies and reparations.

Just and equitable transitions have been brought to the forefront by communities from Global South. Trade unions have worked with environmentalists and affected communities to enable this idea in places like Colombia[34] for over a decade now with inclusive and participatory dialogues. With more interest and research[35] in this area emerging, it is important for the peoples’ movements to reclaim and design a progressive interpretation for their communities and governance on what these transitions must uphold and provide.

This is our last chance to stand with ourselves[36] and for international solidarity to heed our demands[37]. We have until 2030 to prevent a total climate shutdown, 2023 until countries come together again to declare their progress so far through the Global Stocktake, and no longer than NOW to cut out self-serving interests from our system. To safeguard our present we must come together in affirmative action for those who have been wronged by the system and bear the brunt of climate change; co-creating systems that are just and sustainable for the future.