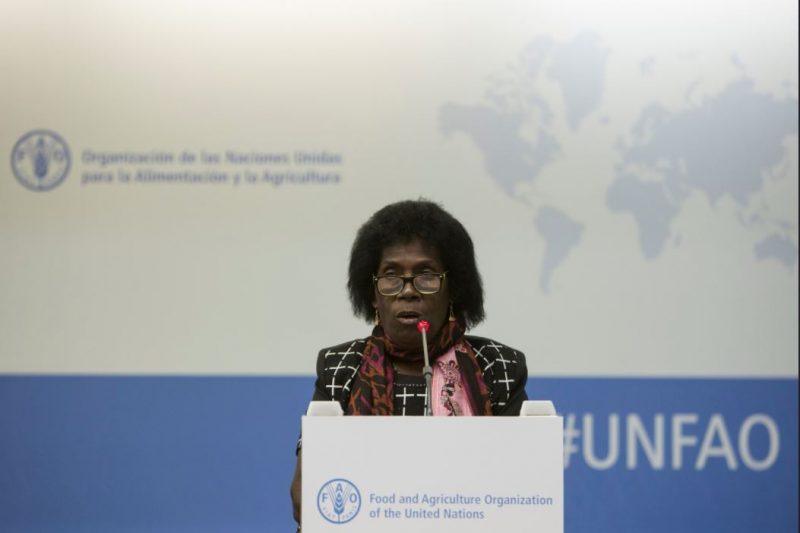 Thank you for giving me the opportunity to address you. I am Helen Hakena of Leitana Nehan Women’s Development Agency, Bougainville in Papua New Guinea.

I want to tell you the story of my community in Bougainville, PNG. For those of you who are not familiar with the Pacific, Bougainville is an island, a little larger than Cyprus, and is an autonomous region of Papua New Guinea. We are a matrilineal culture – meaning our land is inherited through women. But that doesn’t mean women govern, men usually remain as chiefs and decision makers. But our land is critical to women as, together with our oceans, it provides us with almost all the food and resources we depend on as well as central to our cultural and community life.

Our Island is fertile and should be able to provide us with food security and our nutritional needs, but we have faced many challenges that impact particularly on women and girls.

Bougainville suffered a 20 year war when one of the world’s largest open pit mines, Panguna destroyed our rivers, our land and environment but also destroyed our communities.

Even though the mines and logging on our island produced hundreds of millions of dollars in profit, our island did not become prosperous. Less than 1% of the profits of the mine went to local communities. The mine had an enormous impact on our capacity to produce food and access safe water. The mine polluted our water and re-directed our economy to servicing the mine and the foreign owners. Even now much of the population is exposed to mercury, used by artisanal miners, including pregnant women, to access the gold and we have a high rate of birth complications and deformities as a result. The war made it impossible to safely tend to our gardens where we each grow our staple food or to sell or exchange our produce.

Together, the mine and the war, led to terrible maternal and child health outcomes. I myself gave birth in an abandoned building with other women, one of whom died. The war also brought an embargo which prevented any imports of oil, medicine or technology. The embargo did, however, prove the resourcefulness of Bougainvilleans and the capacity to produce all our own energy and food when needed. We produced energy from pigs and used coconut oil as fuel for engines.

Together conflict and mining pollution led to dire health, educational and societal problems. They resulted in some of the highest rates of violence against women in the world with 62% of men admitting to having raped a woman.

Now, after we negotiated peace and take steps toward improving development outcomes, we face another enormous threat – climate change.

My organization conducted a Feminist Participatory Action Research on Carterets Islands of Bougainville to document the impacts of climate change on their lives and to take actions to build a local climate justice movement. The research found that;

The people of the atolls surrounding Bougainville are already being re-located – they are the world’s first climate refugees. People who have lived without electricity, without contributing climate emissions are now suffering the consequences of the world’s greed and consumption.

Climate change negatively impacts food security in a number of ways, including by decreasing availability of local food through a reduction in agriculture yields, availability of arable land, fresh water, and availability of fish and marine life. We are experiencing changes in rainfall patterns, droughts, floods, rising sea-levels, and salination. It makes it harder for communities to make a living out of agriculture – women cannot grow enough to feed themselves and their families.

Women and men experience different impacts from climate change, particularly regarding their roles as food producers. When land is matrilineal, the loss of land is devastating for women. Several of the relocated women were abandoned by their husbands and without land they face a bleak future. The different roles and knowledge that women and men have in food and crop production, as well as fisheries must be carefully planned for, otherwise discrimination can get even worse.

Women must have collective power to develop long-term sustainable solutions.  We now work with the Atolls administrators to ensure women have a role in defining their future.  We women led the peace process and I believe we can lead the sustainable development process if given the opportunity.

Now governments and corporations are talking about re-opening the mine. The reason they give us is that there is no other way to prosperity, that we need more money to cope with a future of climate change, that we need foreign exchange to import more food and energy.

We must ask ourselves whether our planet needs more prosperity or just fairer prosperity?

This planet and our resources are our common wealth, they belong to all of us and our future generations. PNG is one of the most bio-diverse countries on earth and the third largest rainforest in the world. Surely, that must be more valuable than gold and copper.

I know it would take brave governments and a different UN to resist the weight of corporate power and wealthy people. I know how hard it would be to cooperate to collect more taxes, to put a moratorium on new coal mines, to protect all our rivers, our land from pollution, to guarantee women decision making power over our land and resources, to agree to a reasonable living wage, to guarantee all people free healthcare, lifelong social protection including food security. To deliver development justice.

But it is possible. We have the wealth. We just need the political will.