Silence is never an option

Good morning! My name is Alma Sinumlag, an Indigenous Kalinga-Igorot, from the Cordillera Philippines. The Cordillera Region has a shining history in defending land, life and resources. We have a proud history of halting the setting up of a supposed biggest dam in Asia with a capacity of 1000 MW, funded by the IMF and World Bank in 1970s to 80s. This dam would have inundated 100,000 families, their sources of livelihood, and the burial grounds of our ancestors.

Yes, we have won this battle. We could not have won it if not for the participation of all sectors, the unity between and among our tribes, the courageous women who did unimaginable actions to block and ward off the intruders. We won this battle, but it was never an assurance that our territories are safe from big corporations salivating to exploit what is left and with our government allowing its sell-out. 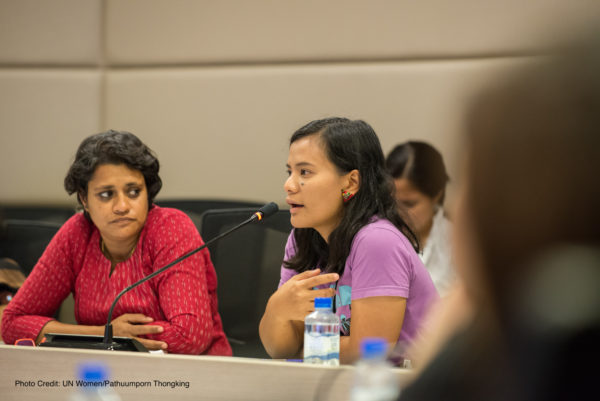 In a global neoliberal economy that prioritises profit over people, our ancestral lands are continuously opened for big extractive industries mostly owned by huge foreign corporations. Our collective rights to our ancestral land are not respected, our access and control over our resources are denied. Women’s role in food production is diminishing and there is no genuine process for obtaining free prior and informed consent from the peoples who are directly affected by these so-called ‘development’ programmes.

For decades, the vibrant women’s movement is at the frontline in defending not only our ancestral territories, but the environment as a whole. This movement empowers rural women, indigenous women and their communities to assert their rights as people, as women and in pursuing our rights to self-determination. But it is alarming that the lives and security of the leaders and members of this movement are increasingly in danger. Our members in the communities experience threats, harassment, intimidation, arrests, filed with trumped-up cases and are even killed for the work they to do to defend people’s rights and our environment.

Back in the Cordillera, 5 of my colleagues are facing trumped up cases filed against them by the military. This has been a painstaking ordeal among the WHRDs, their families and the organization they belong to. It has been very difficult financially, emotionally and psychologically.

I came here to Bangkok to share the story of my people, but yesterday during our civil society workshop, in discussions with my sister activists from around Asia Pacific who are also fighting for the rights of women and girls, we realized that we have the same story.

Around the region, there is no let-up on attacks against WHRDs. Women who are working for land rights; women defenders of the environment, women protecting workers’ rights, the rights of women with disabilities, the rights of refugees and displaced peoples; those building movements among the LGBTI and more are facing threats to their lives and security.

But we are resolved that silence is not an option. We remain steadfast in building women and people’s movements. We remind our governments here today of the social contract: as duty bearers you are accountable for the systematic violation of our land rights, for our loss of access and control over our natural resources, and for assault, harassment, and threats against Women Human Rights Defenders by both state and non-state actors. We remind governments that our people and our planet will not survive much longer if we continue to choose harmful development that displaces people and pollutes the environment.  We remind states of their obligations under the UN Declaration on the Rights of Indigenous Peoples, and the importance of ensuring genuine free prior and informed consent of local communities, including rural and indigenous communities, before adopting and implementing any development programmes. We urge governments to ensure participatory gender and environmental impact assessment in all the phases of large scale projects encroaching our lands and resources.

From where I stand, I am surrounded by unwavering courage of hundreds. I invite you to feel it too, because we need you, our governments, to show courage and be bold in translating commitments to uphold human rights and fundamental freedoms of all people, that are already existing in our constitutions and in regional and international instruments, into actions.

Courage, to live out the fundamental principle of our social contract that sovereignty belongs to the people: By holding corporations accountable for violations, environmental degradation and diminishing sources of our food and nutrition.
By ending the impunity that rural and indigenous women are too familiar with and hold state and non-state actors accountable for violations committed.
By completely withdrawing the presence and operations of military from our lands and let peoples of the land sustain their peaceful and sustainable livelihoods.
By withdrawing the trumped-up cases filed against defenders – and divert that energy and resources to actively ensuring an enabling environment for peoples’ movements, democracy, justice and peace to thrive.