Skip to content
Home > Save The Date! Join Us For A Ground Level People’s Forum in New York

Save The Date! Join Us For A Ground Level People’s Forum in New York 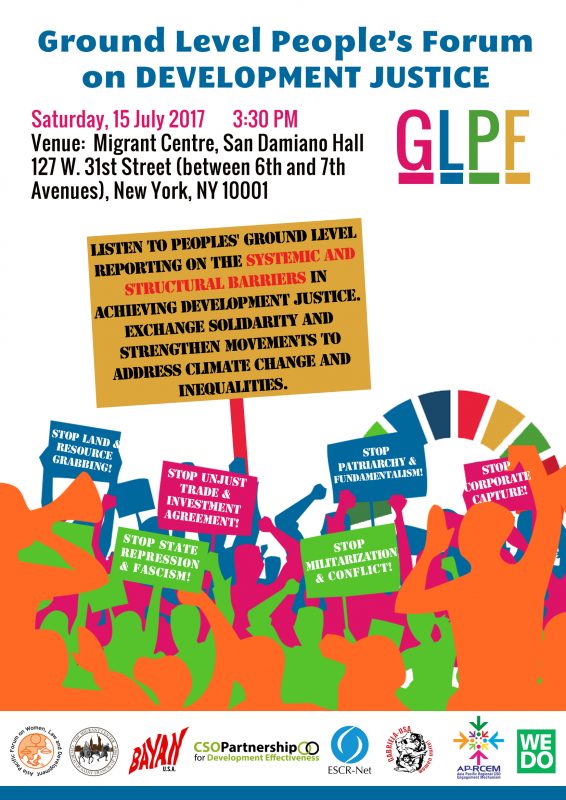 The civil society and people’s’ movements will come together at the Ground Level People’s Forum to have their voice heard even as the United Nations and the High Level Political Forum (HLPF), where their futures are determined, continues to ignore them. The GLPF will hold our governments accountable for the commitments they have made under the SDGs and reaffirm our demand for Development Justice.

Two years ago, Head of States and Governments gathered in New York at the UN Summit to adopt the Post-2015 Development Agenda subsequently known as the Sustainable Development Goals (SDGs)/ Agenda 2030. The SDGs came after years of negotiations to determine the development priorities for the next fifteen years.

At the centre of the follow-up and review of the SDGs, is the High Level Political Forum (HLPF) that was created in 2013 to replace the Commission on Sustainable Development (CSD). The HLPF was given ambitious governance goals, ranging from providing political leadership for action on sustainable development; setting the sustainable development agenda; and follow up on progress in implementation of the SDGs. And yet at the same time, this so called “high-level” forum has only been granted modest resources and very little authority. Even the HLPF’s most direct governance function – reviewing national implementation of SDGs – is voluntary, ensuring that the translation of the SDGs rhetoric to practice will not happen.

Governments around the world have made repeated commitments to ensure all people enjoy human rights, including the right to developments, and have repeatedly failed to meet their obligation and promises. While the governments have failed to take the SDGs as an opportunity to chart a new course for development, allowing instead for a weak accountability system, these goals form part of the social contract between peoples and our governments. Grassroots communities who bear the brunt of the growth driven and extractivist-model of development are rigorously monitoring these goals even if governments do not.