“Free Trade Agreements like the TPP and RCEP will force the privatisations of our public services, skyrocket the price of our medicines, push workers’ wages down and restrict the policy-making space of our governments, preventing developing countries from using the same policies that developed countries have used in their own path to development,” said Diyana Yahaya, Programme Officer at Asia Pacific Forum on Women, Law and Development (APWLD).

“In many Southeast Asian countries, women’s cheap wages are the source of companies’ competitive advantage and when a country decides to increase minimum wage, corporations pack up and move to another country with cheaper labour. In Cambodia we see foreign corporations threatening to leave every time the workers demand higher wages. This anti-people policy and race to the bottom with workers wages and labour rights will only continue under TPP and RCEP,” added Reasey Seng, of SILAKA, Cambodia.

“Communities in Jakarta, especially women who rely on water services have suffered for years at the hands of the city’s private water contractors who charged high fees and failed to supply clean water consistently. Even after 13 years of legal battle and Supreme Court’s decision that water privatisation is a violation of human rights and that it should be reversed. Jakarta’s municipal government have so far refused to carry out the court decision. Trade agreements such as TPP and RCEP will promote privatisations further, and make it hard to reverse it,” said Arieska Kurniawaty of Solidaritas Perempuan, Indonesia.

The civil society groups issued a collective statement which urged the ASEAN Member States to take people-centred approach and not trade away women’s human rights and their path to just and sustainable development. They demanded sincere measures to be taken that reduce inequalities of wealth, power and resources within countries, among countries and between rich and poor. 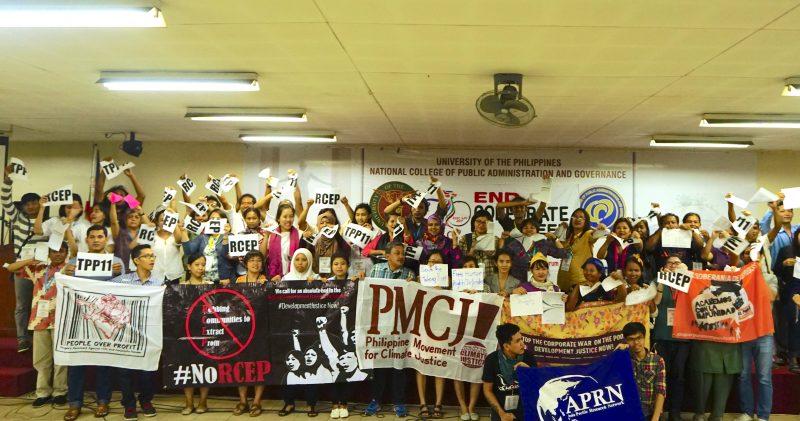 ACSC/APF is an annual forum of Civil Society Organisations in ASEAN Member States, which is held as a parallel meeting to the ASEAN Summit of Heads of State. The meeting is hosted by civil society in the country that holds the ASEAN Chairmanship. Participants of this forum come from civil society organizations, NGOs, people’s organizations, and people’s movements.

Asia Pacific Forum on Women, Law and Development (APWLD), a leading network of feminist organisations and grassroots activists in Asia Pacific. Our over 200 members represent groups of diverse women from 27 countries in Asia Pacific. Over the past 30 years, APWLD has actively worked towards advancing women’s human rights and development justice. We are an independent, non-governmental, non-profit organisation and hold consultative status with the United Nations Economic and Social Council. F:apwld.ngo  T:@apwld

For any press queries, interviews and further information, please contact