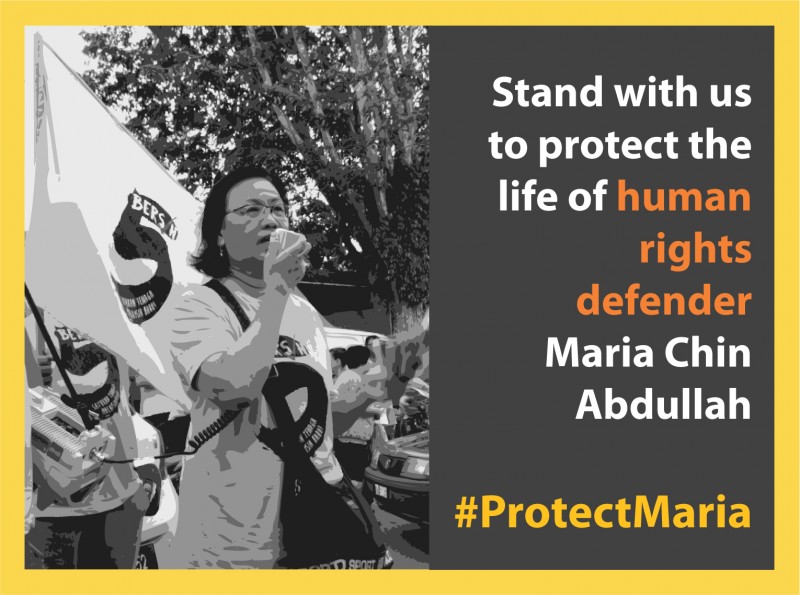 Asia Pacific Forum on Women, Law and Development (APWLD), together with  civil society organisations from across Asia Pacific and the globe calls on the Government of Malaysia and police to immediately investigate the death threats against BERSIH 2.0. Chairperson Maria Chin Abdullah and her family members, ensure their safety and security, and bring perpetrators to justice.

On 18th October 2016, Maria Chin received death threats against her and her family via vile images in a WhatsApp message, purportedly by local Islamic State (IS) terrorists. It is exceptionally alarming that Maria has been threatened with an execution style death with a warning that the video of that will be circulated on social media.

On 20th October 2016, a car belonging to Maria’s son was splashed with red paint at her residence. Maria Chin has received several death and other forms of threats, judicial harassment and intimidation as a result of her activism leading the nation-wide movement for ‘clean’ democratic elections and governance – BERSIH. This particular death threats against her and her family members is targeted to disable the planned BERSIH 5 rally on 19th November 2016.

On 29th October 2016, the police arrested Maria while she was distributing Bersih flyers in Lankon, Sabah. She was later released on bail after being questioned for two hours.

Women human rights defenders are subject to gender-specific threats, and threats to their family are used as a typical form of violence to silence them. We are deeply troubled and concerned that Maria and her family are in grave danger and strongly urge the Malaysian authorities to:

The Malaysian Government itself has been complicit in harassing and leveling charges against Maria Chin for organising and participating in peaceful actions. State sanctioned harassment and efforts to portray Maria and BERSIH as threats to national security or unity emboldens extremists and creates a permissive culture for threats. We also urge the Malaysian Government to immediately and unconditionally withdraw all charges against Maria Chin Abdullah under the Peaceful Assembly Act 2012.

Join us in urging Malaysian authorities for speedy and accountable actions by sending your written appeals with the above demands to:

Through BERSIH, human rights defenders like Maria have led some of the largest peaceful assemblies in the history Malaysia which created democratic space for their fellow Malaysians to speak out in public.  She has served as the National Women’s Coalition president and All Women Action Society (Awam) president. She  was also executive director of the Women’s Development Collective and executive director of APWLD member, Persatuan Kesedaran Komuniti Selangor (Empower). She has been recently awarded the prestigious Gwangju Prize for Human Rights.

BERSIH started out as the Joint Action Committee for Electoral Reform, which was formed in July 2005, and the coalition’s objective was to push for a thorough reform of the electoral process in Malaysia. BERSIH was officially launched on 23 November 2006 in the Malaysian Parliament building lobby. The time came for BERSIH to continue its crusade for clean and fair elections independent of any political party. BERSIH was thus  re-launched as BERSIH 2.0, a coalition of like-minded civil society organisations unaffiliated to any political party. Their aim is to effectively monitor both sides of the political divide.