Women comprise most of the workforce in many of the industries and especially in the informal sector. For instance: they are heavily employed in  garments, electronics, food and service industries such as domestic help, childcare, teaching and nursing.  Yet, they remain most invisible, discriminated, and vulnerable, and also least paid. Despite the history of women leading labour movements and achieving long lasting change[i],  women are still less prominent in trade union leadership or even as members of trade unions.

The need to develop women leaders and empowerment of such leaders on labor movements has been widely felt. APWLD piloted a training titled “Women Leading, Women Organising: Amplifying the power and solidarity of women trade union leaders”, held from December 18 to 21 in Chiang Mai, Thailand. The training brought together 23 women trade union leaders and organizers from 9 different countries. These extraordinary women have been organizing among agriculture workers, domestic workers, migrant workers, entertainment workers, garment workers, teachers and bank workers among others. 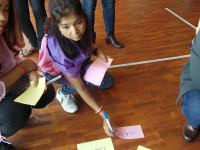 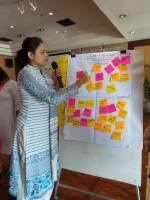 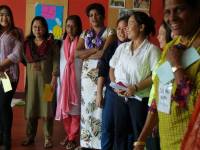 “If the women are not able to raise their voice, how can they achieve their rights.” Says Nazma Akter, president of the Sommilito Garment Workers Union, a coalition of 30 unions with 70,000 members in Bangladesh. She said that women leaders are much more like than male leaders to address issues of discrimination, reproductive health, child care, which are not high on agendas of male leaders. Bangladesh’s garment industry is  made up of 85% women workers[ii], and have faced many challenges in recent years.

Daisy Arago of the Center for Trade Union and Human Rights in the Philippines highlights the multiple discriminations faced by women workers as they struggle for their rights. She said that in her country the rate of membership in trade unions has declined so much in a 13-year period: from 13.3% of workers in 2001 to only 4% in 2014. This is partly due to the trend of employment informalisation and contractualiastion, where in workers do not get full-time regular work.

“Informalisation massacres the unions. By practice, regular and full time workers have the right to form unions.  [In the Philippines] only 30% of those in the unions are women. The power of the union is in collective bargaining, but only 238,000 workers are in the collective or enjoy a collective agreement with their employers. So there are several layers of marginalisation.”

Organisers such as Diana Novita from the Interfactory Labour Federation, based in Seragen city, Indonesia have worked hard to support women workers and women unionists in many ways, including training, and information and education through their weekly radio programmes geared towards women workers.

At the training, facilitators highlighted the importance of strengthening union organizing specially gaining the right to organize can unlock other rights.  Judy Taguiwalo, Programme and Management Committee member of APWLD and also president of a teacher’s union in the Philippines said that while economic issues are important, having union rights and gaining non-economic rights have lasting impact and strengthens the workers.

One of the exercises during the four day training was for the participants to prepare a mobilising speech. When each woman took her turn to present, they gave fiery and passionate calls, channeling their anger, highlighting hope, and inciting to action. This exercise was found to be one of the most helpful for and was stated as very useful in their work once they go back to their countries.  The ‘Substance-Structure-Culture framework’ equipped the trade union leaders and workers with feminist lens to analyze various issues. Likewise, the ‘Issue-outcome-options’ framework was also found to be helpful to the attendees in performing their duties better.

The attendees echoed that for the first time they were able to have very effective and practical lessons, tips, and skills required for them in furthering their duties efficiently, mobilizing fellow union members, and in advancing the unions agendas.

[i] “Gender in the History of Labour Unions” http://www.shmoop.com/history-labor-unions/gender.html