Benjamin Ramos is a founding member of the National Union of Peoples’ Lawyers (NUPL), while Katherine Panguban heads NUPL’s Women and Children Committee. The attacks on both are symptomatic of an environment of impunity for human rights violations that the current Philippines government is well-known for. APWLD demands that the politically motivated charges against Ms. Panguban to be dropped immediately and for the murders of Benjamin Ramos and the nine farmers to be independently investigated.

On October 25, 2018, Katherine Panguban, representing the NUPL, assisted Flordeliza Cabahug, the biological mother of Lester, a 14-year-old witness in the Sagay 9 massacre. Ms Panguban was assisting Flordeliza in recovering custody of her son, Lester, from the police and the City Social Welfare and Development (CSWD) of Sagay.

Given the choice between his parents for custody, Lester chose his mother over his estranged father, and was released accordingly. Lester’s custody release to his mother was officially documented and  made in the presence of the following: (1) Flordeliza Cabahug, Lester’s mother, (2) Vic Pedaso, Lester’s father who also sought custody of him, (3) Ms Consolacion Espinosa, Head of CSWD Sagay, and (4) Katherine Panguban, Flordeliza Cabuhag’s legal counsel. Prior to release and while in the custody of the police, Lester was made to sign a document, the content of which was unknown at the time, as a copy was withheld from Katherine Panguban and Lester’s mother. 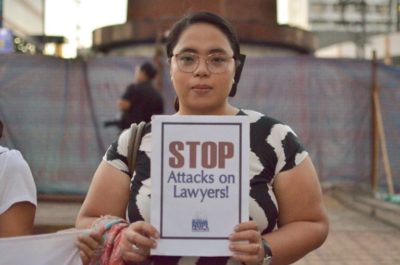 On November 1, 2018, Ms. Panguban learned that a criminal complaint for kidnapping and serious illegal detention was filed against her by Lester’s estranged biological father, who is widely believed to be in the control of the police and military. This criminal complaint materialised despite the fact that Lester’s custody release was:

Ms Panguban in the course of her work as human rights lawyer with NUPL assists in several high-profile human rights cases in the Philippines, including Sister Patricia Fox’s deportation case, the murder of Lumad student Obello Bay-ao, the Lake Sebu massacre, and appeal against the death penalty for human trafficking victim Mary Jane Veloso. She has shared her work experience in several APWLD activities including a consultation on Feminist Strategic Litigation held in December 2017.

APWLD’s Regional Coordinator, Misun Woo, stated: “The filing of a kidnapping and serious illegal detention complaint against a human rights lawyer doing her work in supporting people facing human rights violations is evidence of the judicial harassment faced by human rights defenders in the Philippines, under a government that is vehemently anti-human rights. As a feminist organisation founded by women lawyers like Katherine Panguban, APWLD stands in solidarity with her and our sisters in the Philippines as they continue to stand up for human rights under a misogynist and fascist government.”

APWLD therefore calls on the Duterte government to: